Well, we slept okay.  Having baby Zoe in the bed with us didn't make the baby queen size bed feel any bigger.  Next time I think we'll try having her sleep by Ella.  Everyone else slept great except Kyrie and me.  Unhooking went very well.  I have been dreading emptying the holding tanks, but that went fine.  Other than forgeting to raise up the jacks I think I remembered everything I was supposed to do.  Luckily, the RV was smart enough to warn me when I left the jacks down.  We stopped at our favorite Dells breakfast place - Paul Bunyans - and then we were on our way home.  All in all it was a really great experience and we can't wait to do it again!
Posted by Marc at 7:51 PM No comments:

Today we had our first day of camping, or should I say Kamping (we were at a KOA). 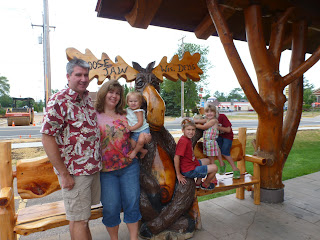 We first stopped at Moosejaw for lunch and then headed to the campground. 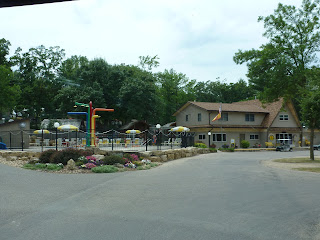 We checked-in and were led to our spot.  We booked a pull-thru site with full hook-ups to make things easy on ourselves for our first outing.  We spent about an hour figuring out how to hook everything up properly and trying to remember the important details from our RV orientation, while our kids waited "patiently" to get to the pool and the playground.  After we were satisfied that everything was setup correctly we gave in to the kids demands and headed to the pool. 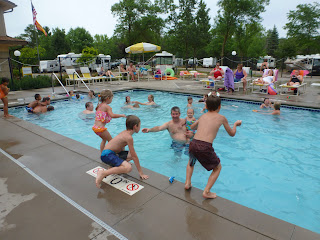 We spent a couple of hours there before heading back up to the camp site to setup the grill and cook dinner.  I promptly burnt the italian sausages to a crisp (not used to the burners being so close to the food), but they turned out good enough and we were all really hungry after the swimming. 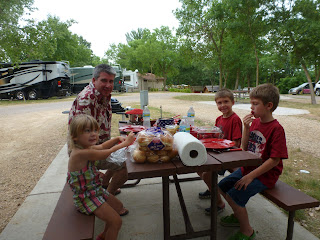 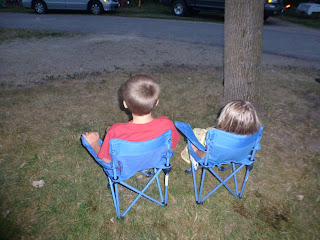 After dinner we started a campfire and Kyrie washed dishes while the kids and I took a walk. 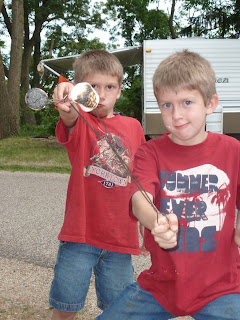 Ella brought most of the sand from the playground back with her on her face, hands, and legs.  It was a beautiful day and we had all the windows open in the RV - unfortunately, the smoke from the campfire blew right in and now it smells very smokey. 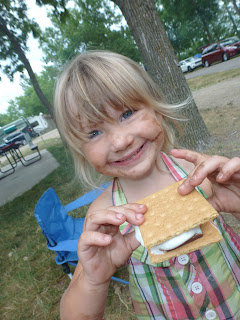 We cooked up some smores and then I took Ella to the shower to clean off the sand - she was too dirty to put in our brand new shower!  Our campsite is very close to the bathrooms and showers and we avoided using the bathroom in the RV most of the day.  I just hated the idea of taking our "resort on wheels" and turning it into "the ulitimate portapotty".  Finally, I gave in and the kids were delighted to finally get to try out the RV toilet.  So far, so good with this RV stuff.  The driving hasn't been too difficult and the camping has been a lot of fun.  Now, let's see how the sleeping goes...
Posted by Marc at 8:35 PM No comments:

Our misadventures have taken an interesting turn with the purchase of an RV!  Now we can add "camping" to the multitude of trips that our family enjoys. 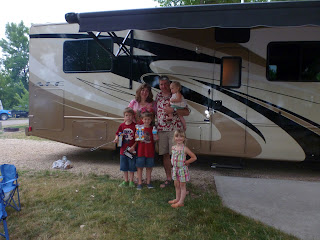 Today we took our first voyage in our new RV.  We bought the RV a couple of weeks ago and have been anxiously waiting to finally use it.  So after two weeks of packing the RV with everything we could possibly need (and a lot more), today we began our test run to make sure that everything is working and to see if we forgot anything before we go on our slightly longer test run in early July and then our “real” vacation at the end of July.  At about 9:30am we blasted “Moving Right Along”, left the house and drove to the gas station.  Pretty uneventful there.  After the chest pains subsided from watching the dollar amount on the gas pump go up and up and then getting in the RV and seeing that it was only half full, we were on our way.  Well, almost.  Just before we reached the tollway, Kyrie asked if I remembered to put the Ipass in the RV to pay the tolls.  Of course I hadn’t and we had to drive back home to get it.  During the first 1,000 miles the RV is supposed to get about 7mpg and then go up to a gas sipping 10mpg after that.  I quickly realized that the detour to the tollway, back to our house, and then back to the tollway, about 14 miles, cost us 2 gallons of gas and we hadn’t gotten anywhere.  Well, we blasted “Moving Right Along” again and were on our way for real this time.  Oh, I forgot, sometime between the tollway and our house the pocket doors to the back bedroom came unlatched and bashed into the wall when I made a turn.  We had this problem when we first picked up the RV and we thought it was fixed, but I guess not.  Anyway, back on the road, the rest of the morning was uneventful.  We stopped at the Olive Garden in for lunch.  Luckily, they had a lot of extra parking in back, so I didn’t have to do any tricky parking maneuvers.  Just parked it in the very back across 4 or 5 regular spaces.  The kids had a good time at Olive Garden – Max especially liked the bathroom.  After a very long lunch, we were on our way again.  We decided to stop at the Camping World that we pass on the way to see if they could look at those pocket doors.  When I spotted the sign for it, I was trying to figure out if I needed to take the first exit or the second exit.  I had a scare because as I was trying to figure it out, the road construction ahead made the lanes move to the left and I didn’t realize it until the last second.  It looked like I was going to run out of road with a cement wall on one side and a big truck on the other.  Luckily, the lane didn’t end, it just veered left and everything was fine – except that I should have taken the first exit instead of the second exit (I don’t even know how many extra miles that was).  So we got to Camping World and they were very nice to look at the doors for us even though it was super busy there.  They were able to do a temporary fix on them so that we could use the doors again.  We’ll have to have them do a permanent fix later.  After that we made it almost all the way to the cabin without incident.  As we were driving the last mile or so, all of the sudden a wild turkey flew right out in front of me (who knew they could even fly?).  It seemed like slow motion as I tried to slow down the RV enough to let it get by, but there just wasn’t enough warning.  I looked in the mirror, hoping to see it still flying away behind me, but no I didn’t see anything.  I was convinced that I nailed it and that it was smashed against the grill of the RV.  That’s when Kyrie said, “That’s not how you grill a turkey!”  We arrived at our cabin a couple minutes later.  I reluctantly got out and looked at the front of the RV.  Lo and behold, nothing!  Not even a feather!  I think the turkey must have made it somehow.  We drove back down that road later that night and didn’t see any signs of it, so I’m going to just assume that everything was fine.  Well, our first test run is going okay.  A couple incidents and a 3.5 hour trip that took 7, but we’re here and tomorrow we test phase 2 – camping!