DisneyWorld and Disney Cruise - Day 3 - Magic Kingdom, the Pool, and dinner at Art of Animation

This morning we headed over to the Magic Kingdom (which is already decorated for Halloween). 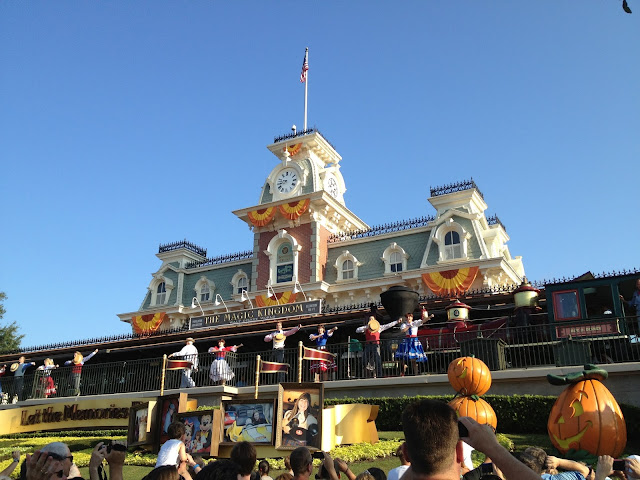 Zachary got to wear his first matching shirt... 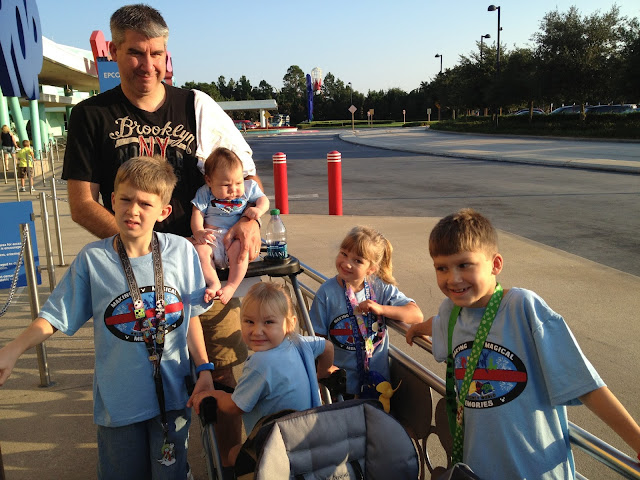 It was another hot one today.  Right off the bat I was looking for shade.  I guess wearing a black shirt wasn't a great idea.  We arrived in time to see the park open (of course).  Max and I really wouldn't mind sleeping in once in a while.  The rest of them seem to actually enjoy getting up early!  We went straight to Peter Pan and then took a ride on the carousel before heading to Winnie the Pooh. 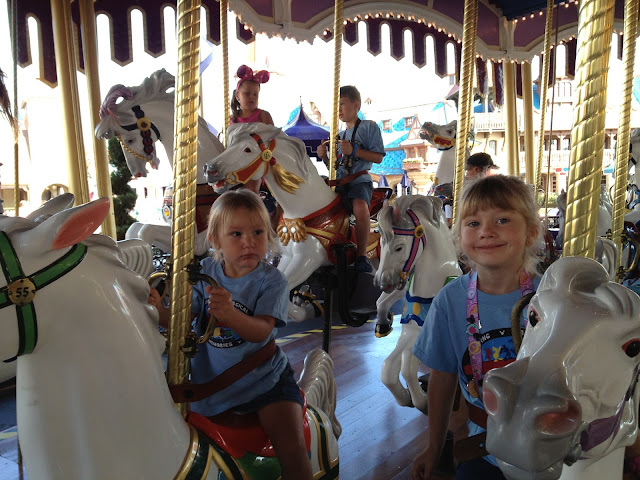 Poor Ella.  You can just tell that she's always going to have trouble with Zoe.

This must be the "poorly supervised infant" attraction... 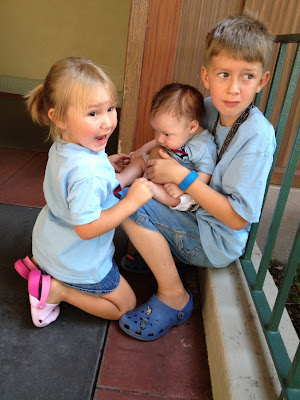 A blurry picture of Ella, Zach and me on the Buzz Lightyear ride. 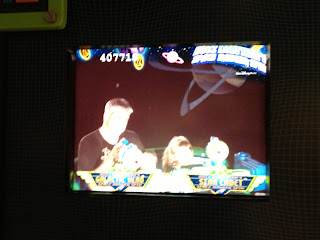 That's because, you're not supposed to take pictures of the pictures they are trying to sell to you.  But everyone else was doing it and it was so darn cute.  Unfortunately (?) I am not a rule breaker, and felt bad, so I didn't take time to focus and meant to delete it.

This is what happens to you if your mom takes pictures of the pictures you are supposed to buy! 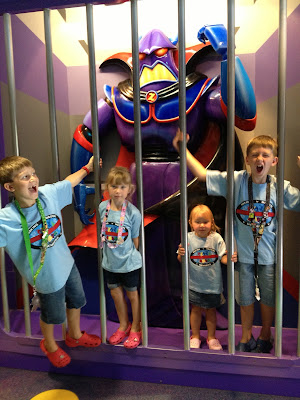 The kids had a really cute surprise exchange with Buzz Lightyear... 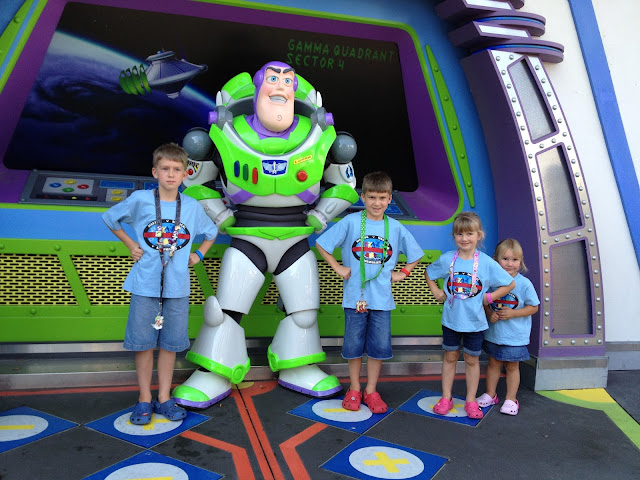 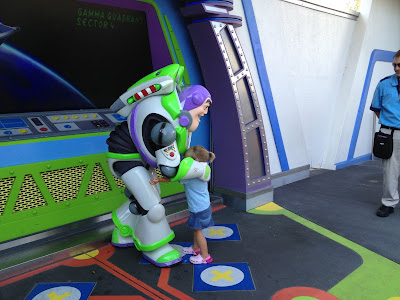 So, for the MagicBands, we used them for a couple of fastpasses (which we really didn't need because the park was rather empty).  But what we did notice was that the reserved area for the parade viewing is the circle right in front of the castle.  So I would definitely recommend using your MagicBand for that if you're interested in the parade.  We left before it started, otherwise we would have tried it out.

I'm not sure how I will like only having 3 fastpasses at Magic Kingdom though once they take away the older fastpass system.  In other words, even though we can pre-schedule three FPs with the MagicBands, we are currently ALSO using the old system to collect additional FPs. There are just so many popular rides at the Magic Kingdom.  I guess the standby lines will move faster since less people will have fastpasses overall, but I really liked being able to have fastpasses for all of the rides even though they were only one at a time.  It will be nice not to have to run all over the park collecting fastpasses though! 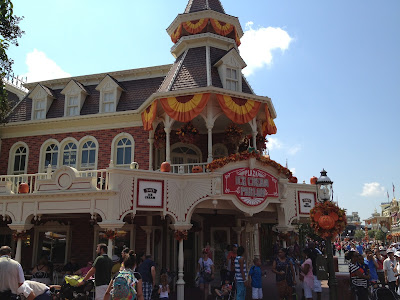 We ate lunch at the Plaza restaurant.  It was good, but Zoe was really tired and so lunch didn't go very well.  Don't mean to be a complainer, but the waitress was excruciatingly slow, which didn't help.  It was the longest lunch ever.  For instance, Zoe had a nap in the middle of it.


I think Max is getting tired of having his picture taken during lunch... 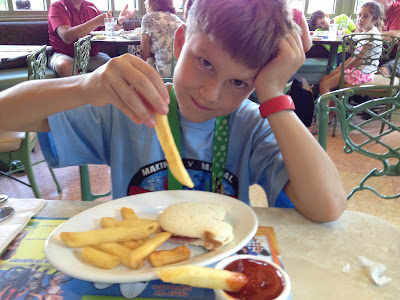 Max actually asked me to take a picture of his french fry.  I also thought the Mickey shaped PB&J was cute.

Ella never gets tired of having her picture taken! 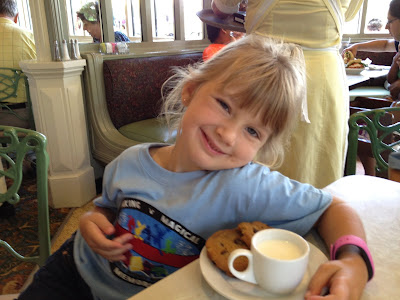 We headed back to the pool in the early afternoon.  The kids had a lot of fun playing games by the pool.  I wish we had our camera with us.  The kids played this game where they threw a ball at a target and if they hit it then a water balloon popped over the person who was sitting in the chair under it.  Well, after the line had gone around a couple of times and nobody could hit the target, Zoe decided she wanted to play.  They let her stand a little closer because she's only two, but sure enough she hit the target right away.  So, when you succeed in hitting the target, then it's your turn to sit in the chair under the water balloon.  Well, I would have thought that she wouldn't be too thrilled about that, but there she was just sitting there with a smile on her face.  And, even when someone finally hit the target and she got drenched, she was still fine with it.  All I can say is that they are all lucky she had her nap today!

Zoe also had a lot of fun in the pool.  She loved wearing her life preserver and then letting go of Kyrie and actually "swimming".

After pool time, we walked across Hourglass Lake to the Art of Animation resort for dinner.  They had way better choices in their cafeteria for dinner, but it also took much longer to go through the lines.  The food was really good though and I would recommend it in spite of the wait.


We actually ate in shifts, because by the time Marc came back with my food, the kids were finished, and I was finished by the time he came back with his.  At least I was too tired to move, so it was fine sitting for so long.   I am looking forward to Contempo Cafe though even though they have fewer choices, because you just order on a screen and pick up your food all at once when it's ready. 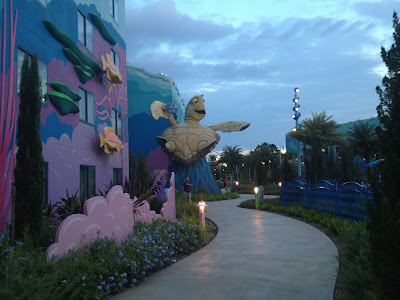 
A picture of Pop Century from the bridge... 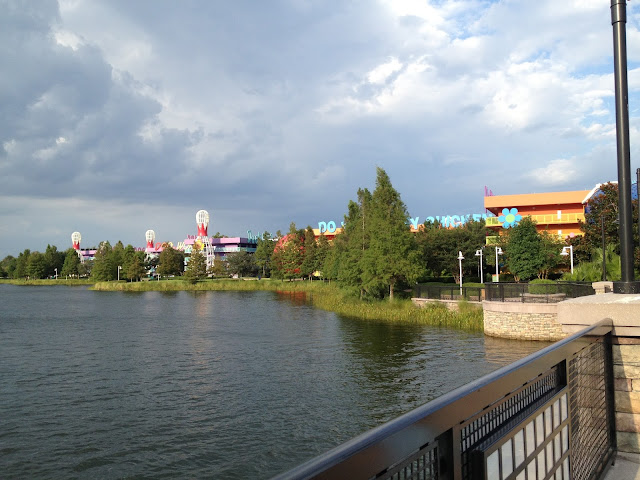 Max didn't mind this picture with his corn dog nuggets! 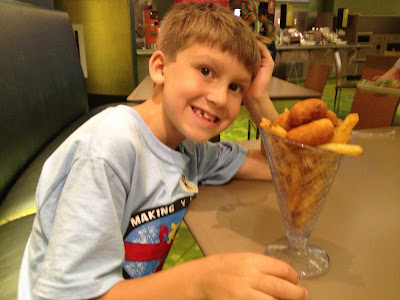 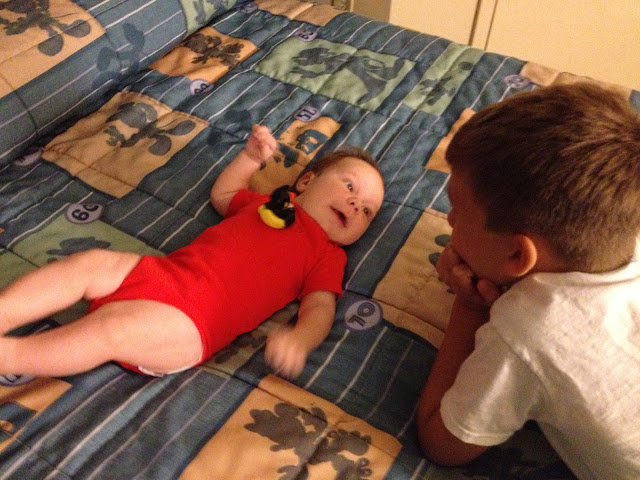