Today we went to Disney's Hollywood Studios.  We went ahead and slept in again, which is completely against Kyrie's nature, but it has been working out well since we have had some late nights and haven't been worried about trying to get onto a bunch of rides. 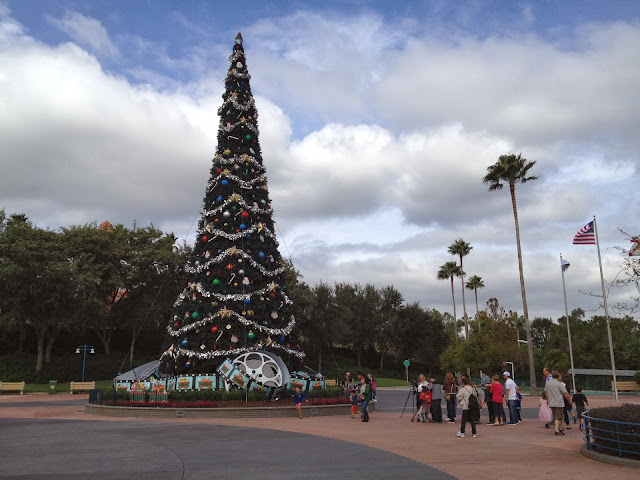 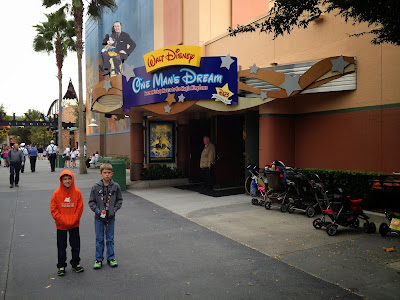 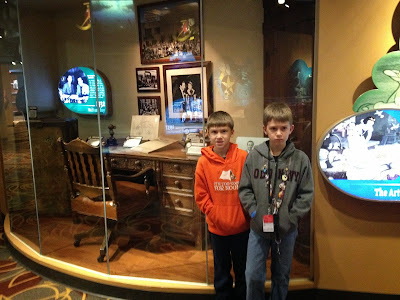 The boys and I have been reading the Kingdom Keepers series which are books about a group of kids fighting Disney Villains from taking over the parks.  In the first book the story climaxed with the kids breaking into the One Man's Dream attraction to steal Walt Disney's pen which had magical powers against Maleficent.


Just as described in the book, there were several desks that either are not Walt's or do not have pens on them that we saw before we saw pens on the desk in Walt's office.  The boys loved that the story was so accurate and it made both the attraction and the book even cooler! 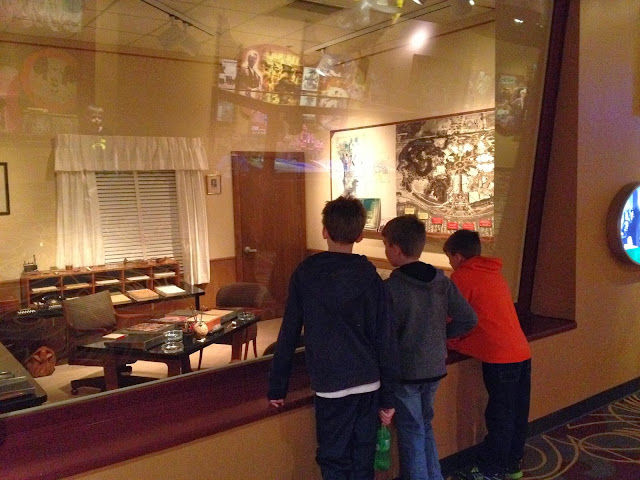 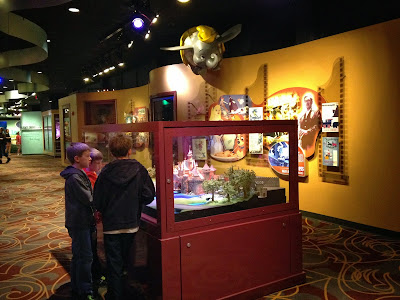 We liked seeing models of buildings, lands, rides, everything! They had models from all the different Disney parks around the world. 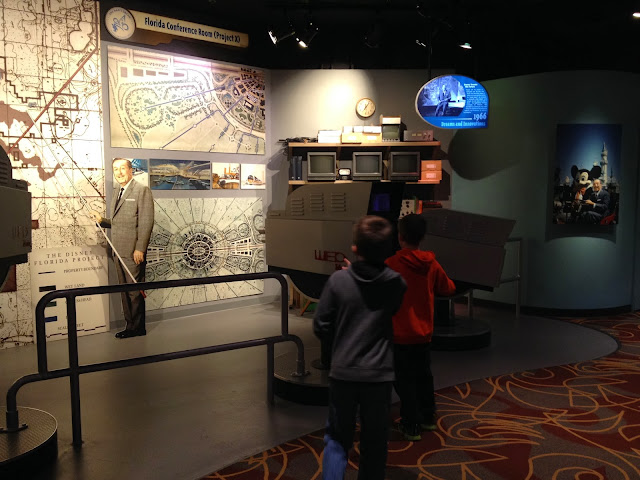 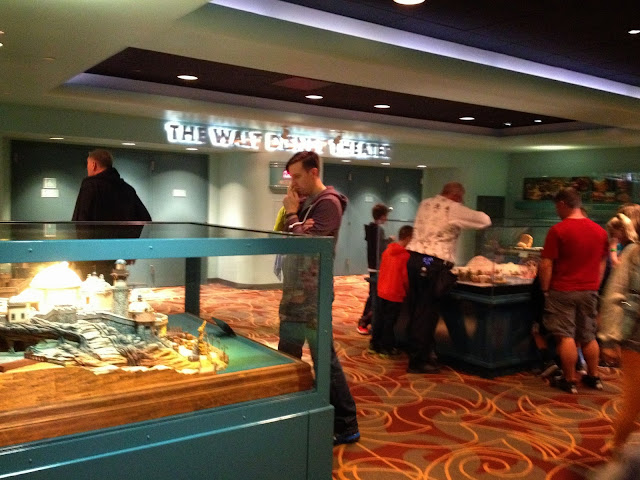 The attraction ended with a movie about Walt's life. It's amazing how many times he failed and laid everything on the line time and time again to realize his dream.  So glad we finally took in this attraction that I had previously written off as boring to dash off to another ride. 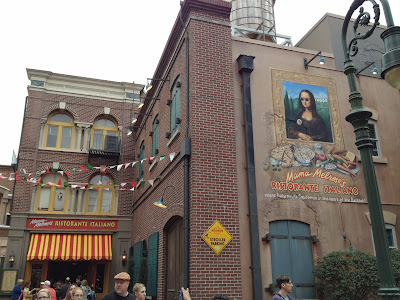 After that it was time for lunch at Mama Melrose's.  We had a little hiccup with our meal plan and the restaurant couldn't see our credits, but that was all worked out and the food was delicious. 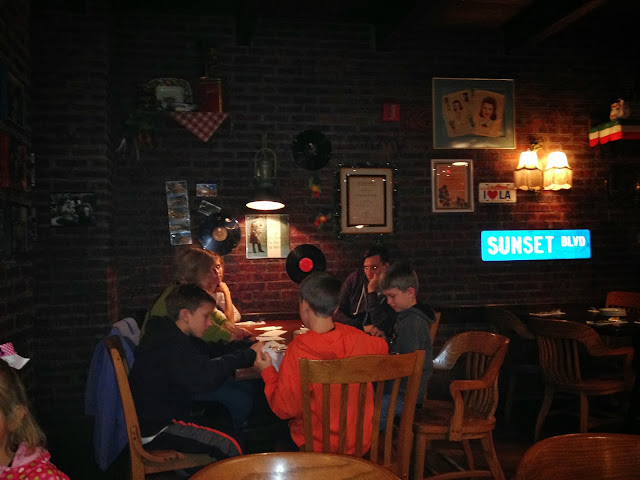 Even though we do everything we can to speed things along like knowing what we're going to order before we sit down, it still always takes two hours to dine with our group of 13.  The kids have all done a great job entertaining themselves and behaving well. 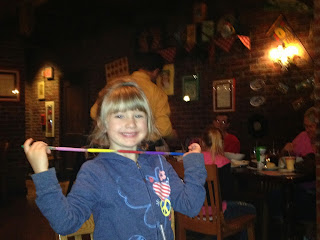 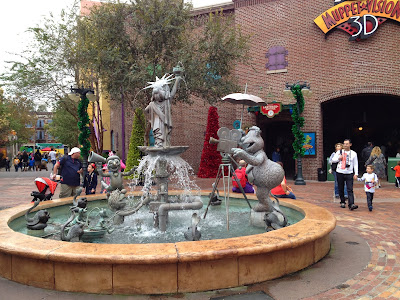 We split up again after lunch.  Greg and I took the boys on Star Tours and the rest of the group saw
the Muppet Vision show.  I thought the version of Star Tours that we got this time was hilarious.
We hit a wookie and saw it sliding down our windshield.  It's hard to describe, but it was definitely funny. 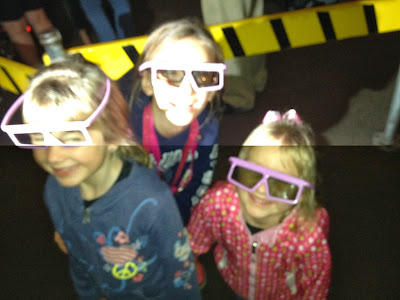 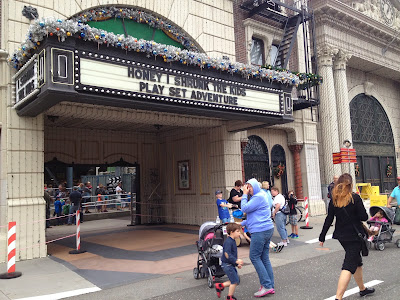 We planned to meet up again at the Honey, I shrunk the Kids play area, but there was actually a large line to get in.  I've never seen that before, so I guess that gives you a clue as to how busy it was today.  The crowds were never an issue for us, but they were definitely noticeable. 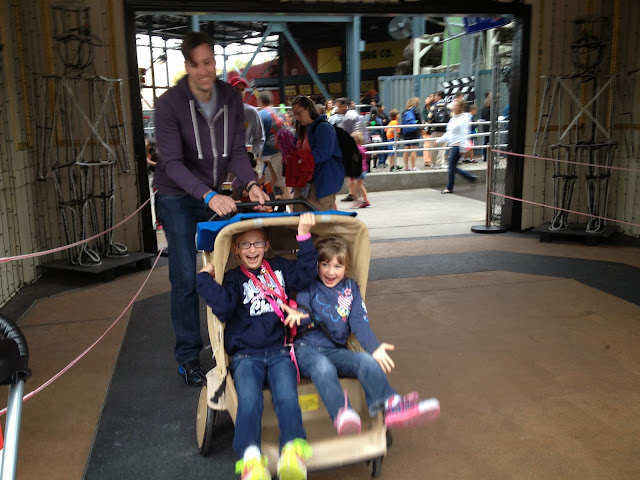 Our next plan was to use our Toy Story Mania fastpasses, but the ride broke down and they weren't even letting people stay in line (imagine being one of the people at the end of the line that had waited an hour or more for nothing!) 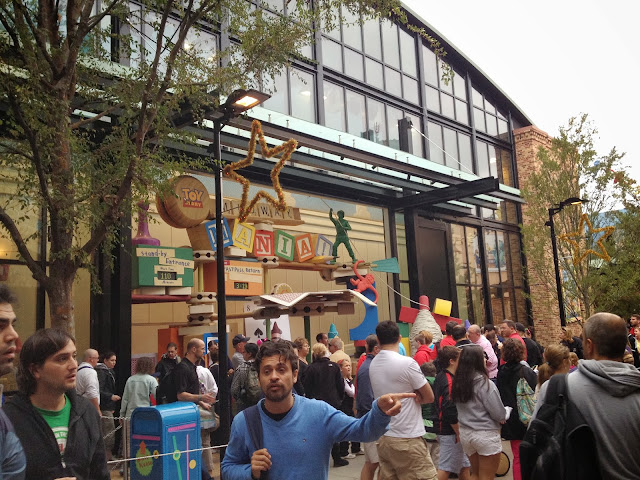 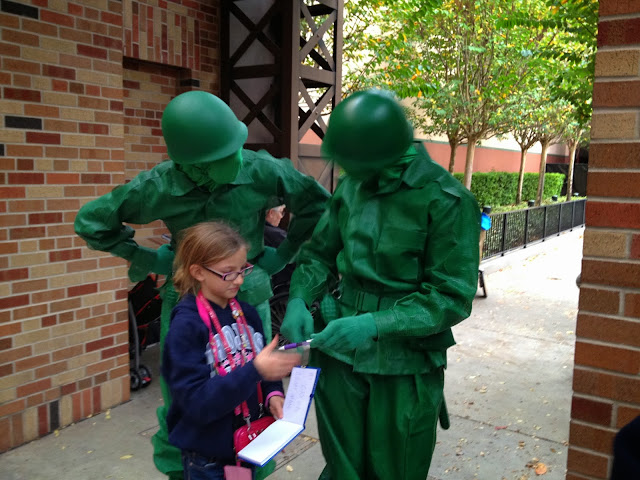 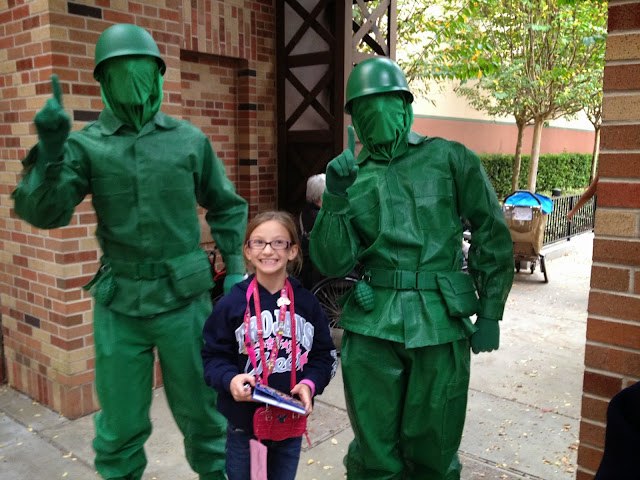 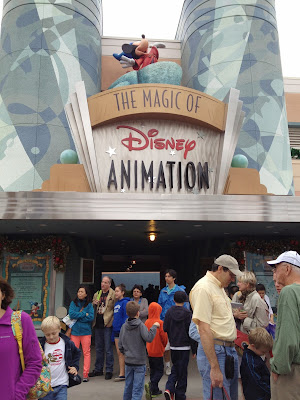 We moved on to The Little Mermaid show and the Animation Building.  Everyone had fun with those.  Then Kyrie and Jay went on The Tower of Terror ride and Rock-n-Roller Coaster while Mom and Melissa took the girls on The Great Movie Ride.  When they got to the scary Aliens part of the ride, Ella (4) said very loudly that "This is my favorite part!"  I don't know where that girl gets it from. 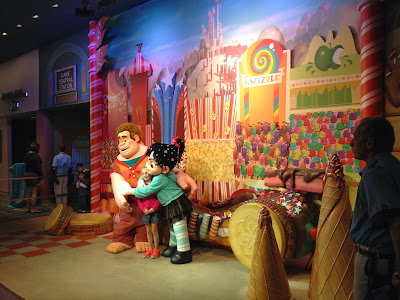 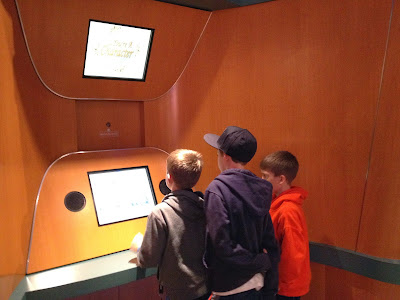 With the help of these computer questions, the kids determined which Disney character that they are most like.  Max was most like Lumiere pictured here.  Jacob and Kyle were both assigned villiians probably because they said they like eating nice people for lunch whereas Max said he liked eating lunch with nice people.
The boys learned they could go to a drawing class.  Jacob wanted to go so badly that he even opted out of using fastpasses for Tower and Terror and Rockin' Rollercoaster!  That's a big deal not only because he loves those rides but also because he could have gotten the ride photos which really makes him happy. 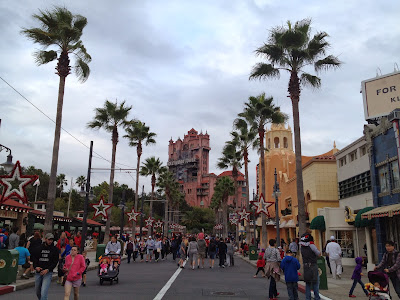 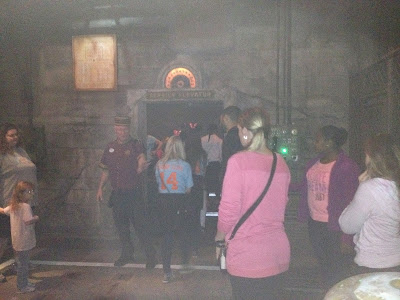 After a lot of standing around, it was time to see the early Fantasmic! show.  It was fairly cold today and very windy so the spray from the show wasn't much fun, but at least we weren't sitting up very close. 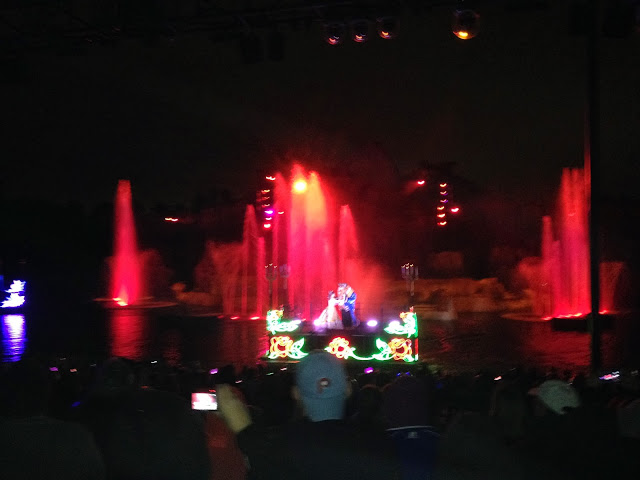 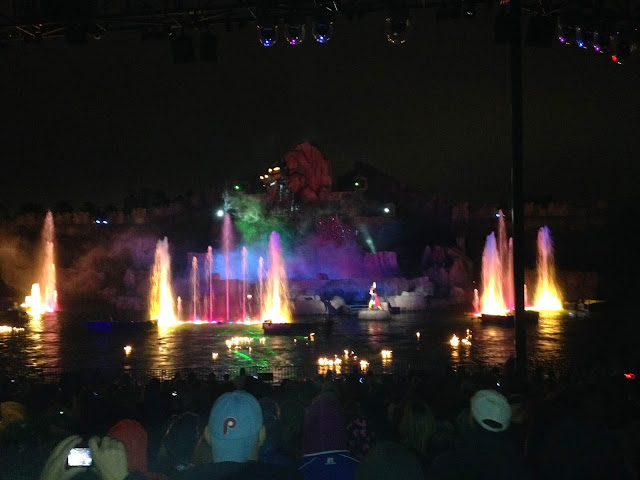 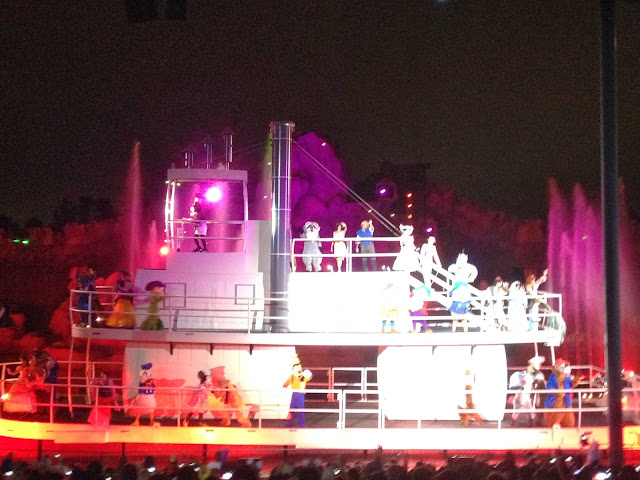 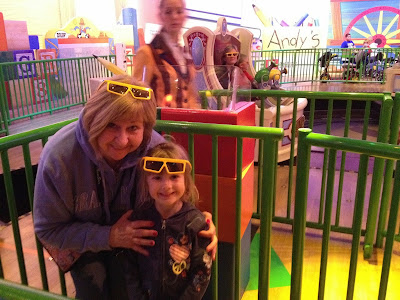 After the show we went back to Toy Story Mania which was working again.  It was a little bit longer line for the fastpass than usual, but we still were on fairly quickly.  Everyone loves that ride. 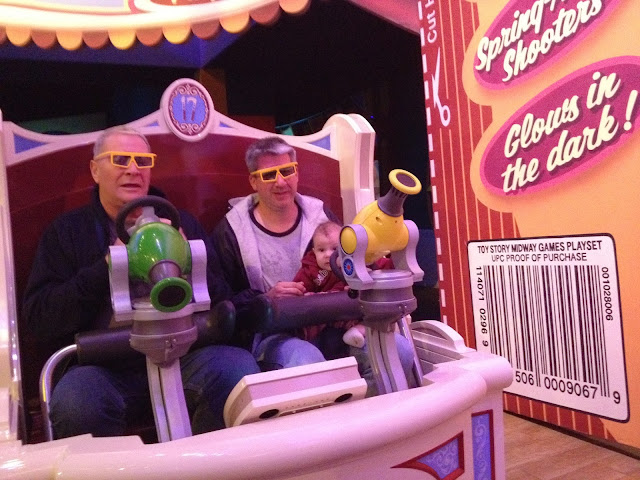 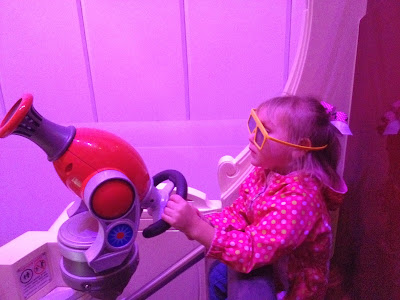 Finally, we ended the night by seeing the Osborne Family Christmas Spectacular.  It's a wonderful display, one of my favorite things at Disney during the holidays, but this time it was ruined.  We were standing around enjoying the lights and then decided to move further down the road to get a different view.  Well, we weren't careful and we left poor Max behind at the first location.  And with so many kids with us and so much to look at around us, we didn't realize he was missing for several minutes.  Thankfully, he was right where we left him and although quite shaken, he was okay. 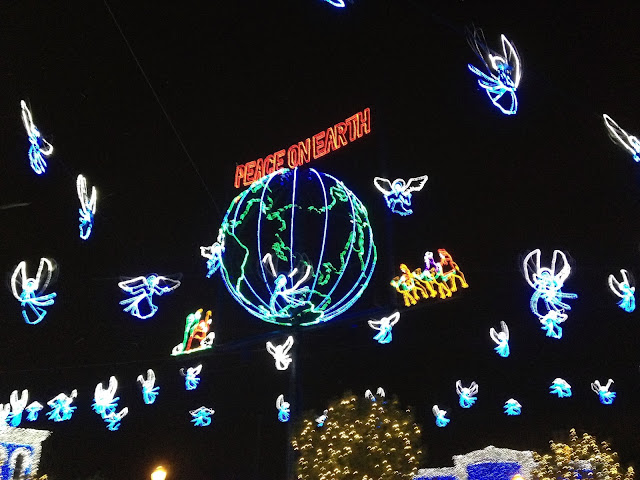 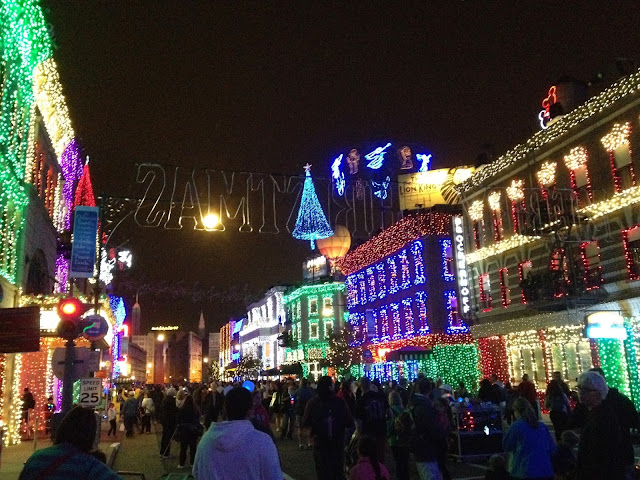 Max was so smart to stay right where he was. Max said he was trying to collect the "snow" that was falling.  Max is much like his dad who years ago got two speeding tickets in two days because he was distracted from the speed limit sign by a giant pumpkin.

Grandma Rita bought Max flashing Mickey ears to make it easier to keep an eye on him and I don't think I've taken my eyes off him since then. Max was pretty quickly back in a good mood.  Thank God!