October 13, 2012
We're off on our last trip of the year.  This one is not an RV trip.  We're flying to Los Angeles and going to Hollywood, Universal Studios, Knott's Berry Farm, Disneyland, and Newport Beach.

Actually, for Kyrie, the trip started two days ago at her conference in Napa.  I'll let her write about that part.

Not much to write abut Napa.  I flew into the Sacramento airport and rented an economy car to drive just over an hour to Napa.  It's was surprisingly weird to drive such a small car after being used to our SUV and van.  The scenery was pretty right around Napa...grapevines and all...but just highway and nothing notable most of the way.

The hotel I stayed at for my seminar, Andaz Napa, was very nice.  It should be at $400 per night.  The town is tiny and I walked quite a bit of it just looking around and also finding coffee in the mornings.  This town is famous for food and wine.  The food lived up to the reputation everywhere I went.  I didn't have any wine though.  My seminar was great and it was nice although lonely to have so much peace and quiet for a couple of days.  I couldn't wait to see everyone again!

Today, we met up at LAX.  Both our flights were to land at 3:20pm (which would have made for a very crowded runway I think), but ours took off about a half hour late so we arrived closer to 4:00pm. 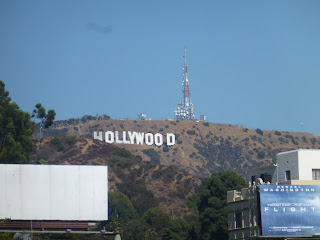 Immediately upon entering the rental car, Jacob wanted to know where the Hollywood sign was.  Luckily it was visible right on the way to our hotel, because I would have had no idea how to find it otherwise.

It was a quiet night.  We ate dinner at Sizzler on the way to the hotel and went to bed very early.

We were really squeezed in at the Holiday Inn Express.  We had a King bed and a sofa bed for the 6 of us.  Fortunately the kids don't mind sleeping on the floor, and they took turns doing that.  We did move to a room with 2 queens and a sofa bed for 2 of the 4 nights which really helped.