Today we went to the The Henry Ford Museum in .  We started with the factory tour.  Zoe didn’t appreciate the introduction video, but I did get to see enough of it to find out that Henry Ford invented a quadracycle (like a car that is powered by pedaling it) before he built the Model T.  The plant that we visited was built to be completely self-sufficient.  They even made their own steel.  I don’t know if they still do or not.  After the introduction movie we saw sort of a 4-D circle-vision movie from the point of view of a car being built.  Zoe liked that one better.  After that we got to see the assembly line itself from the observation deck above.  It was really interesting to see the trucks being built.  I was surprised to see the variety of colors and options all intermixed on the line.


After the factory tour we went to which consists of a lot of old buildings setup in the layout of a village in the early 1900’s.  We enjoyed looking in the houses and seeing what it was like to live at that time. 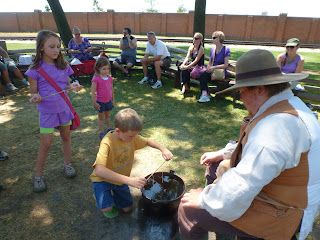 One of the highlights was that the kids got to make their own candles by dipping a wick in beeswax and then dipping it in cold water.  They had to repeat the process quite a few times.  Max got tired of it very quickly, but Jacob stuck it out until the candles were a pretty good size.  They had too many people doing it at the same time so it ended up taking about 45 minutes, mostly because he had to stand in a long line over and over again.  We all learned some things from the visit.  I hadn’t ever considered why covered bridges are covered.  I guess I always just thought it was to make it look nice.  Apparently, they are built that way to protect the bridge from weathering.  They said that it was a lot easier to rebuild the cover part instead of the bridge itself. 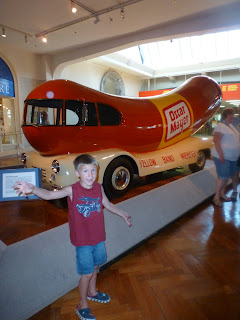 After a ride on the carousel and some ice cream, we headed over to the Henry Ford museum.  There was a lot to see there.  Of course a bunch of different cars, but quite a bit of other stuff as well.  The kids especially liked seeing the Oscar Mayer Weinermobile and the chance to become hot dogs themselves.  I liked seeing the Dymaxion House.  It was made of aluminum and circular and built in the 1930's.  It was built to be very efficient at using space and made out of cheap but effective materials.  It looked like it would be miserable to live in unless it was just one person.  It was 1,000 square feet, but it didn’t seem like it.  The bathroom was as small as the one in our RV and the kitchen had almost no counter space.  It showed a twin bed in the bedroom.  Anyway, it worked out in the end for the designer because he later went on to obtain the patent for the Geodesic dome (like the one at Epcot).  Those were a couple of the highlights of the Henry Ford Museum, but there was quite a bit more to see and I would recommend this stop to anyone passing through the area.


After the museum we headed over to Olive Garden for dinner.  Normally, we try to avoid things that we could have at home, but after a long day at the museum it seemed better to play it safe and eat somewhere that we knew we’d all like.  We thought that we’d quickly get some breadsticks which would make everyone happy, but apparently they didn’t think anyone was going to want breadsticks today.  It took a long time for the breadsticks and salad and then it took a long time again later to get another batch of breadsticks.  Oh well, it all worked out fine.  We were all starving and everyone ate well, which is almost unheard of in this family.  When the waiter asked if we’d ever eaten there before, Max said that he’s been to Olive Garden “like a hundred times!”  While that was certainly an exaggeration for Max, it made me wonder if I have been to Olive Garden 100 times.  I don’t remember when I first started going to Olive Garden, but I figure it must have been at least 20 years ago.  So that would only require 5 visits a year, which I probably exceed now, but I don’t know if I could really have been there 100 times.  It’s definitely possible, but probably more like 80 or 90.  Well, I’m sure that was really interesting to read.  I guess I better get to bed now before I try to count how many times I’ve been to Home Depot or Walmart.