We had a mostly uneventful trip up to Woodruff, WI.  It took a few hours which wasn't too bad (for us).  Our generator overheated just as we arrived.  We read that the ACE has a problem with that and they have a kit to resolve this.  I just wish they would have just fixed it ahead of time.  It was still super hot, so I wasn't too surprised.  We arrived at the campground in the early afternoon and were escorted to our site (which was funny because it was literally right next to the main building).  We quickly hooked up and switched to swimsuits and headed to the pool.

With this being only our second campground it's hard to review it fairly.  The pool seemed rather small for the size of the campground.  The miniature golf course looks abandoned.  I actually thought it was free because of the condition that it was in and the building next to it with the clubs and balls was just sitting open.  Jacob and I inadvertantly had a stolen round of golf.  I didn't realize until I saw a sign in the laundry room the next day that they charge $5 for it.  I'm surprised that anyone pays that.  The rest of the playground area is pretty nice with a mixture of older and newer equipment and some ball courts.  The campground is in a really beautiful setting with trees everywhere.  It sits on the shore of Lake Tomahawk, but it doesn't have much of a swimming beach.  Also, they currently have signs posted warning of swimmers itch, so we stayed out of the lake.  Otherwise it looks like a good lake for boating and other water sports.  It also seemed very expensive, but that may have been because it was a holiday.  Our site was  $65 for full hookup, but not pull-thru.  They have a small store and a restaurant on-site.  They only activity during our stay was Funky Bingo.  I don't know what that is since we didn't attend it. 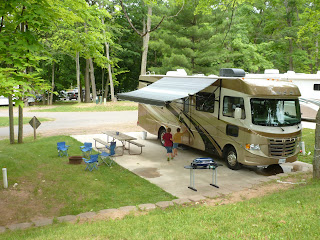 After swimming (and our rogue round of golf), we grilled some food for dinner and headed inside out of the heat.  We watched a couple movies that we rented at a nearby redbox and hit the beds.  I tried to get Zoe to sleep with Ella or Max, but she wasn't going for that, so Kyrie and I ended up squeezing Zoe in between us again.  We still need to figure out a solution to that.
Posted by Marc at 12:36 PM