With “Movin’ Right Along” blaring from the dash we headed out on our second ever motorhome excursion at about 9:30am on this Tuesday morning.  Our first destination is our cabin in central Wisconsin.  For whatever reason it seems to take us at least twice as long when we drive in the RV than when we drive in the van.  Marc has the RV GPS set to warn him when he goes a certain amount over the speed limit.  Even though I am constantly hearing “Speed Warning” coming from that annoying little thing, we seem to go nowhere fast.


It wasn’t a bad start, but we had to stop a get a little breakfast before we got on the interstate.  No problem.  Not much longer to pull up and run into McDonalds than it takes to drive-thru.   The delay really occurred because we detoured a bit to stop at an outlet mall in Wisconsin Dells.  At 12:30 we went to the Crocs store to exchange a pair of shoes that were hurting Ella’s feet.  The boys had to pick out new Jibbitz too while we there.  By then we were pretty hungry and thought the fastest solution was going across the parking lot to Buffalo Phil’s.  Several problems here…  It was busy.  They stated there was a 15 minute wait for a regular table.  (The kids wanted to wait 45 minutes for the train side table, but we refused.)   The next problem was that this place has a huge arcade and ride area.  The kids were dying to be able to ride or play something.  We felt justified in saying “No” since we just bought them new Jibbitz afterall. 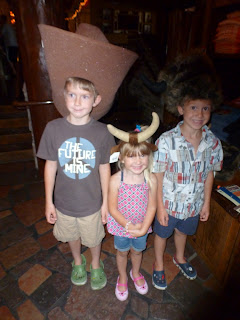 Finally our table was ready (about 25 minutes later.)  The service was slow and poor.  The food was poor.  Overall it was a big 2 hour waste of our time.  I wish we had gone anywhere else!  Oh well, we’re in no hurry, right?


Back on the road and not far to our cabin now.  It's super hot out.  The temperature reading on the RV says 105, but it's probably exagerating a bit.  It took us 7 hours to go 150 miles - that's just a little more than 20 miles per hour!

The plan (at this point) is to change into our swimming suits in the RV and drop me and the big kids off at the community pool while Marc and Zoe go turn the air conditioning on at the cabin and unload.  We got to the pool about 5pm.  We had a good time here.  Marc and Zoe joined us about an hour later.  We stayed until the pool closed at 7pm.


Not too hungry but knowing we would need something else to eat tonight we headed to a local convenience store that has a deli.  The hot food section had just closed, but we managed to buy a box of broasted chicken and grabbed a box of frozen waffles to satisfy the kids.


The thermostat registered 86 degrees when Marc turned on the AC.  It was sooo hot outside that two hours later when we walked in it actually felt cool at 84 degrees!  It took all night to get down to 73 degrees.  Even then the temp would rise throughout the day; the AC just couldn’t keep up.
Posted by Marc at 2:41 PM