It's suddenly become much colder here in Florida and Kyrie and I both woke up with bronchitis.  Kyrie went to the second day of her conference and I took the kids to Animal Kingdom for our last Disney day.  It wasn't much fun feeling run-down all day, but the kids had a good time and it's not like we would have managed to get any rest if we stayed at the RV all day.

Jacob was excited to go on two rides that he has never been on - Primeval Whirl and Dinosaur.  He liked them both, but especially Primeval Whirl - even Max loved that one.  Kyrie met up with us at lunch time when her conference ended.

I took the smaller kids to see the Finding Nemo stage show while Marc and Jacob went on the fun rides.

Jacob and I went on Everest a couple of times and he decided that Rock N' Roller Coaster is still his favorite because it goes upside down.  By mid-afternoon we decided it was time to go get some rest.

We caught the parade...rather nearly got caught IN the parade as we headed out of the park.  We stopped at a bench and watched from afar.  We've seen it enough times that that was fine.  We skipped the Safari even though we had fastpasses that were good about now. I was just too tired/sick to walk back there. We'll be back a couple more times this year and can do it again then.

The plan originally was to eat at Yak & Yeti tonight which we all would have enjoyed, but since we weren't well... We stopped at Rainforest Café on the way out so the kids could eat some dinner.  Then we headed back to the RV and put in a video for the kids to watch so that we could rest. 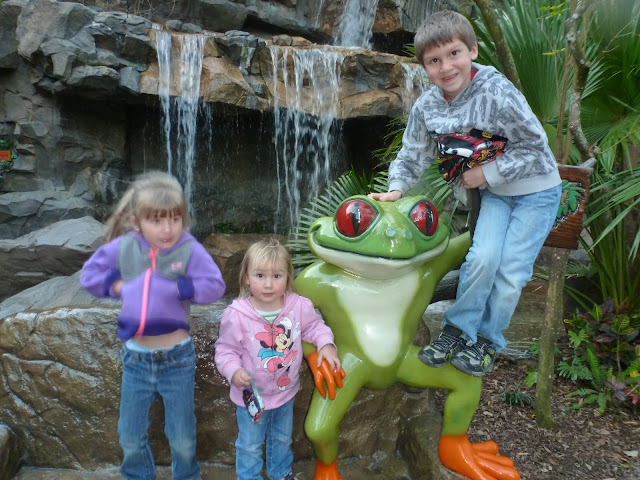