GA and FL Day 3 - Almost made it to Rock City 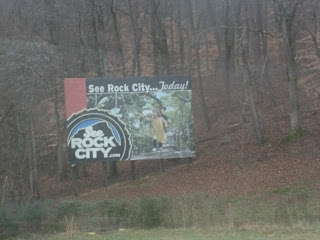 Well, after 30 years of trying, I thought I was finally going to make it to Rock City.  On my one trip to Florida as a kid, I remember seeing hundreds of signs for Rock City.  We didn't stop then. Then about 15 years ago, Kyrie and I drove to Florida and passed Rock City in the middle of the night and couldn't stop.  This time, we reached Chattanooga before lunch time and with only a couple hours of driving before reaching our destination.  It seemed like the perfect time to finally go to Rock City.  The only trouble was that about 10 minutes before we got there, it started raining.  A little rain really shouldn't have stopped me after all these years, but I kept thinking about what a pain it would be to drag the kids out in the rain and it would cost a bunch of money and everyone would just be complaining about being wet and cold.  So, I decided not to stop.  Rock City is probably better as a dream than reality anyway.

So anyway, after skipping Rock City we continued on to Georgia.  We stopped for lunch at a Fuddruckers close to Atlanta and then headed for our hotel.  We're staying at the Marriott Atlanta Airport where Kyrie's seminar is hosted.  It's a nice hotel, not very conveniently located except to the airport of course.  We wanted to take the kids somewhere fun tonight to give them a chance to burn off some energy.  The hotel didn't have any ideas so we looked for a bowling alley.  The first one we went to only had leagues, and by then we were getting hungry.  We decided to stop at Waffle House.  The kids loved that.  Afterwards we found the perfect place - Pin Strike Lanes.  It was a really kid-friendly bowling alley that also had laser tag, arcade games and things like that.  It also had a restaurant, so it would have been perfect if we hadn't already eaten.  We spent like an hour and a half bowling one game.  This was mostly due to Zoe.  She was really frustrated that she was too little to bowl and was putting up quite a fuss.  Anyway, the other kids had a great time.
Posted by Marc at 7:21 PM