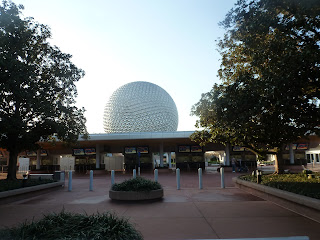 I had a late night yesterday.  We really needed to get caught up on some laundry, but all I had was a $20 bill, and by the time I got started it was after 10pm and the nearby store was closed.  Had to take a bus to the outpost, which is at the main entrance to get bills that were small enough for the change machine.  Once I finally got the laundry going I had to connect to the internet to get some work done.  Well, the wireless internet doesn’t reach our campsite, or the laundry room, so I had to walk over to the pool for that.  The good news was that I got to see a real live possum and a couple of armadillos!  By the time I was done with the laundry and my work it was nearly 1am.  So, needless to say, I wasn’t that thrilled when Kyrie woke me up at 6am to get ready to go to Epcot (which doesn’t open until 9am).

But we weren't the first ones there by any means and we had to get our annual passes and TIW card.  So we had perfect timing. 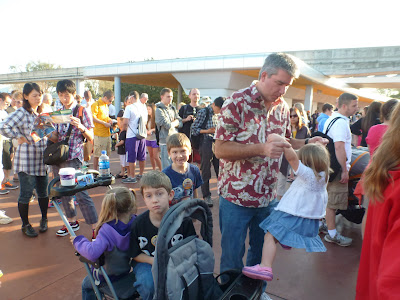 Epcot was a lot of fun of course.  We started with the new version of Test Track.  The look of the ride is different, and there is this whole design your own vehicle kind of thing while you are standing in line, but I didn’t really think that it improved the ride much.  I guess it’s better than watching a video before the ride – that part was always kind of stupid.
I never liked the old ride much, so I thought this new version was better. 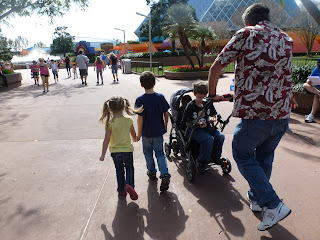 After Test Track we went on Mission Space which is always fun.  The kids especially like the play area inside of the building where you exit the ride.  Then it was time to hit Soarin’ and The Land.  They were great as usual.  Next we went on Journey into Imagination which Max finally went on – he hates pretty much any indoor ride because he doesn’t know what to expect. 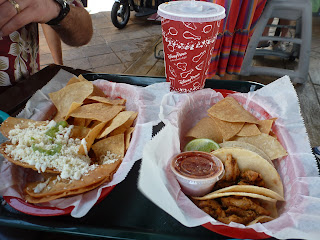 Finally, it was time for lunch at the place outside of the Mexico pavilion which was super crowded and the food not that great.   We have to remember to stop eating here. We did pick up Agent P lunch boxes filled with an uncrustable, yogurt, carrots, and apple juice for the kids before hand. 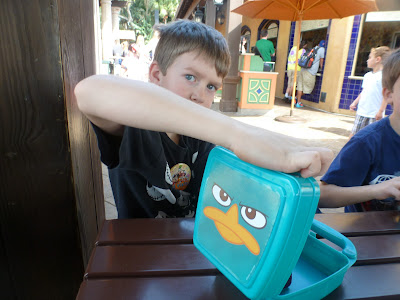 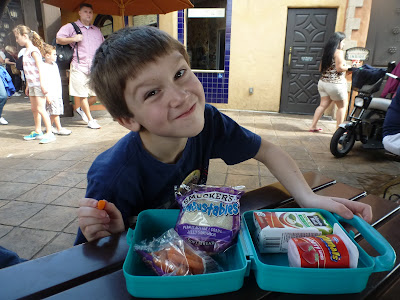 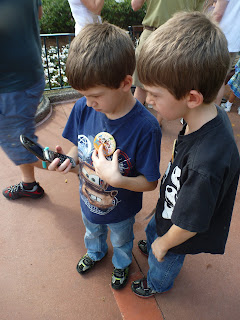 We played the Agent P game in Norway and had a lot of fun defeating Dr. Doofenshmirtz.  Then we had one of these new special drinks that come in a beaker.  (Also Doofenshmirtz themed.)  I think this one was frozen lemonade with passion fruit foam on top.  The kids drank it all so I don’t know if it was good or not, but apparently they thought so.  The kids had a lot of fun getting their Agent P craft stamped in each country.  The boys especially liked it when they drew a flag on the back.  We had fun exploring each country. 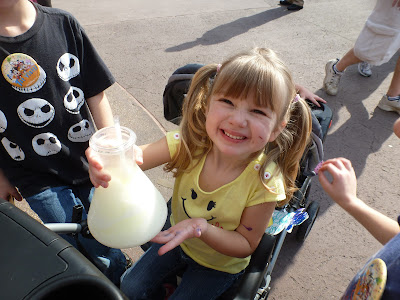 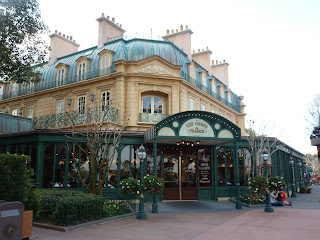 Eventually, it was time for dinner which we had in France at Le Chefs de France.  Unfortunately, Zoe really needed a nap.  I had to take her for a walk for quite a while before she would fall asleep enough to let us go back into the restaurant.  The Macaroni and Cheese there is really good.  Overall the food here is good, but our server wasn't.  It was disappointing after such a good experience last time we were here.  After dinner we took a trip on Spaceship Earth and then headed back to the RV.


The other notable thing about today, was that Ella had lost an earring at the last hotel we stayed at before Disney.  Since she just got her ears pierced, it is very important to get one in again quickly, but I hadn't found a suitable one until today at Epcot.  Tonight, I removed her other earring and put in the new one and then tried to put a new one in the ear that was missing one, but it had already started to close up.  She was crying and I enlisted Marc's help.  He hates this sort of thing, but was awesome at pushing the new earring through the healed up tissue while I distracted and comforted Ella.  Whew!
Posted by Marc at 7:34 PM