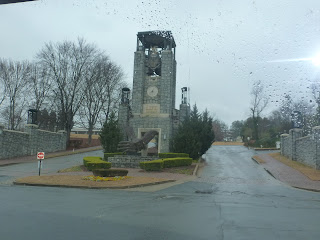 This morning we dropped off Kyrie at Life Chiropractic College where she was talking to some students today and then headed to downtown Atlanta to the children's museum.  I wasn't exactly sure where the heck I would park the RV, but as I was driving around the area by the Georgia Aquarium one of the parking lots flagged me down and showed me where I could park.  They charged me $20 to park in this empty lot across from the Aquarium.  Who knows if they even owned the lot, but the RV was still there when we returned, so I guess we were successful.  The kids had a great time at the Children's museum.  We've been there at least one other time and it's a pretty good one.  I think Ella liked the moon sand the best.  Zoe liked everything, but probably painting was her favorite.  The boys liked volunteering in the shows.  At lunchtime we walked up the street to Subway and then headed to Centennial Olympic Park.  The park was really nice.  We didn't explore the whole thing, but they had some really nice playground equipment and the kids were at least mildly interested in the fact that the Olympics had been there at some point.

At 3:00pm it was time to pick up Kyrie so we did that and then headed back to the hotel.  I think Atlanta is the toughest city that I've ever driven in.  Even the times we have come here and rented a car it has been difficult.  There are so many roads coming in and out of Atlanta and it seems like I always have to cross over 3 lanes of traffic with about a half mile notice.  So with an RV it seemed almost impossible.  Kyrie had to get to her conference at the hotel by about 4:00, so we didn't have any extra time.

After we got Kyrie to her conference the kids and I headed out to dinner at Golden Corral, which works for all of us.  Then we went back to the hotel and went swimming.  The pool was too cold for my taste (most are), but the kids loved it and we had the whole thing to ourselves.  Ella and Zoe were shivering by the time we were done.  Hopefully, everyone will sleep well tonight!
Posted by Marc at 7:35 PM