Four of us (and probably the people in the rooms on either side of us) didn’t sleep very well last night.  Max’s earache came back last night and he was just miserable. (Screaming!)   Zoe was also miserable (and screaming!), but I don’t specifically know why.  Between the two of them we were up for a couple hours straight in the middle of the night.  Both of them were complaining very loudly which would be bad enough at home, but it makes it a lot worse when Kyrie and I are worrying about other families being woken up.  I swear Zoe cried and complained for a complete hour (no exaggeration) and Max didn’t do much better.

With Zoe, after the hour or so she cried that she wanted me to take her out into the hall.  Kyrie told her that she couldn’t cry out there and Zoe immediately stopped crying and said, “Okay!, I won’t cry.” in a very cheerful voice.  Was she just claustrophobic?!  So, I carried her down the halls of our level and she quickly laid her head down on my shoulder.  I figured she was asleep most of that time, so when we had finished a lap around the ship I started opening the door to our room.  She immediately started crying again.  So, we stayed out in the hall and did another lap.  This time it worked and she stayed asleep when I put her to bed.  She still woke up several more times through the night, but she just needed to be reassured that I was still there and then she went back to sleep.

With Max it was a little bit funny.  Both Kyrie and I knew that his ear hurt so we were focused on trying to help him with that, but he was so tired that he just wasn’t making sense.  He got into a big fight with Kyrie because she couldn’t understand that he was complaining about not getting any pirate jewels.  Even Max didn’t know what he was talking about when we asked him about it this morning.  Also, when he was having all of this trouble in the middle of the night he told me that he just wanted us all to go home.  Yikes!  Not good for the first night of the cruise.

We somehow survived the night and everyone slept in until about 8am, so we were able to get back a little of that lost sleep.  Our fish extender was full again and so was the floor between our cabins with all the cool FE gifts people had dropped off last night! 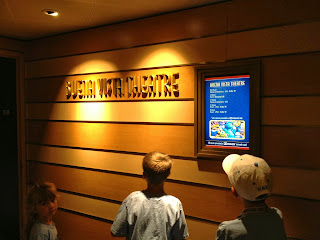 We had breakfast at the buffet and then Zoe and I went to play on the pool deck while the rest of them went to the movie theater to watch Monsters University in 3D.  The have a great splash area for kids 8 and under, so I figured that she would have a good time playing in the water. 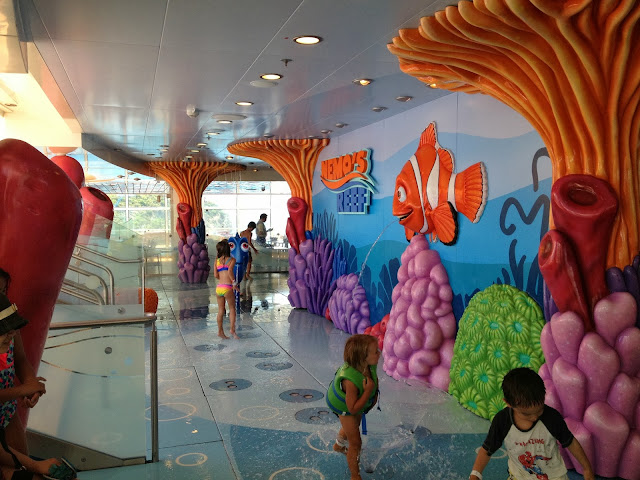 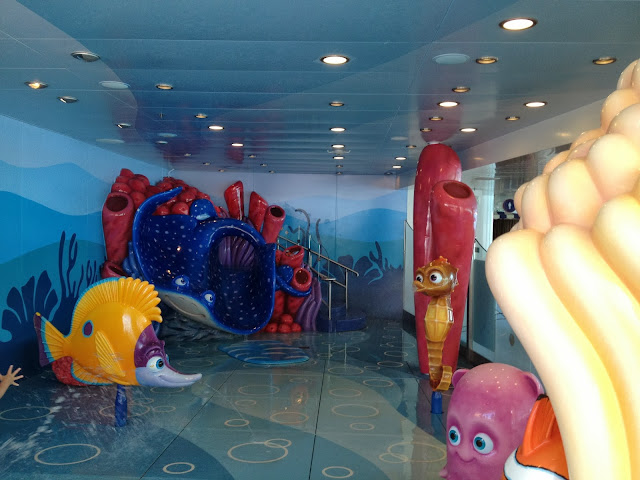 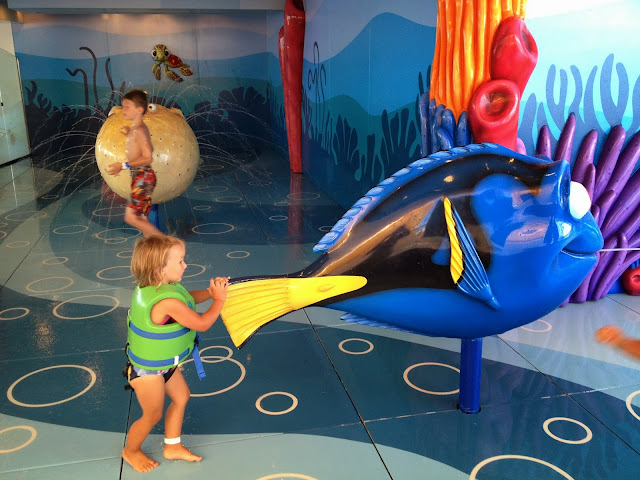 She did like the splash area, but after about 5 minutes, she wanted to swim in one of the pools or use the water slides.  Unfortunately (for her), all of those areas are off limits to diaper aged kids and the splash area is the only water feature that she’s allowed to use.  Well, try explaining to a stubborn 2 year old that they can’t use any of the pools.  Obviously, that didn’t go well.  I distracted her for a while by taking her up to the sports deck to play miniature golf.  She liked that, but we had to walk by the pools after that which got her complaining again.

I feel like the blog for this vacation has just become the “complain about Zoe” blog.  I really don’t mean to do that.  It’s really not her fault.  We’re just not used to it, because her three older siblings weren’t really like that.  They all certainly had their moments as two or three year olds, but they all were much easier to deal with.  We haven’t quite figured out exactly how to work with her to help her get past her troubles.  We did make sure to get her a nap today.  That wasn’t easy, but we considered it a necessity.  She slept for a couple of hours.


While Zoe was taking her nap, the older kids played at the Oceaneer’s Lab.  Jacob said that it was his best cruise day ever because he had so much fun there.  And he doesn’t think any other day could possibly be as fun. 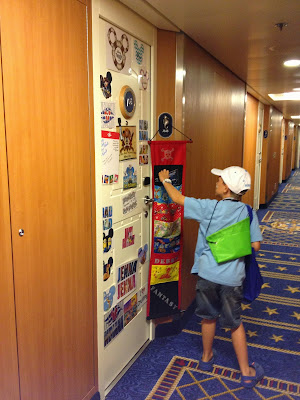 I picked Jacob up from the Oceaneer's Club earlier than the other kids so we could deliver our fish extender gifts.  We made a CD's of a mix of Disney music along with a custom cover for the cruise.

We also decided not to make Zoe sit through dinner tonight.  We checked her in to the nursery while we had dinner. (Which she had been begging to do anyway!)  I think she liked that better.  Zoe's room service dinner before going to the nursery: 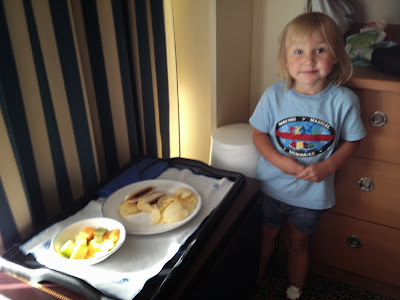 For dinner we ate at Animator’s Palate.  The food was excellent and Crush from Finding Nemo kept us entertained.  I finally felt like we were on a cruise vacation!  Knowing Zoe was having fun, we had a relaxing dinner.  It was formal night so we all dressed up, so the kids were even more adorable too! Zach, lacking formal wear, wore a Mickey Mouse onsie and matching booties that our next door cruise neighbor gave to him for a FE gift.

The older kids dressed for dinner: 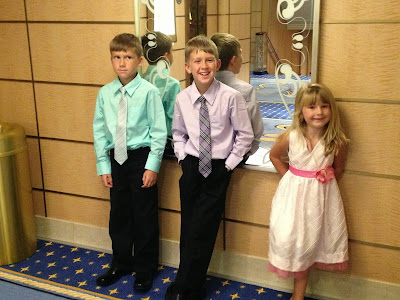 I don't think Zach is going to appreciate this: 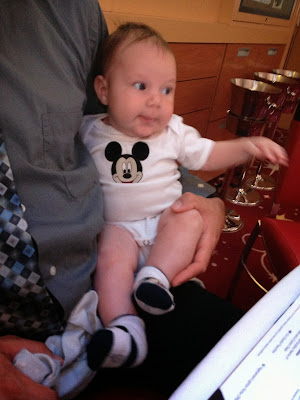 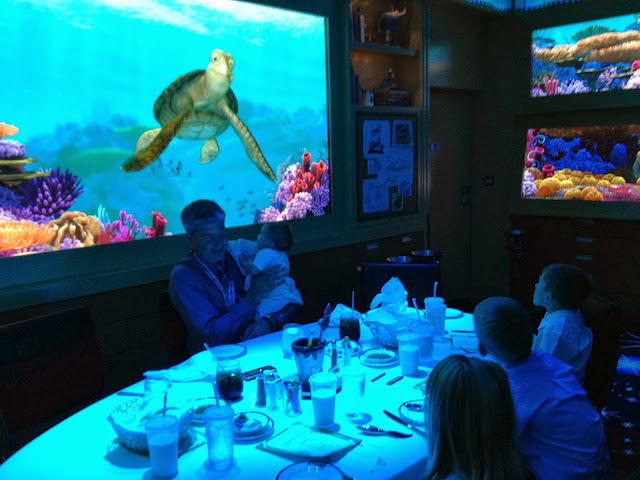 Kyrie and a sleeping Zach: 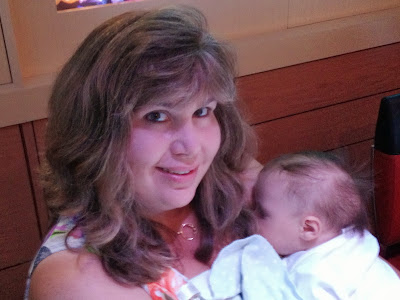 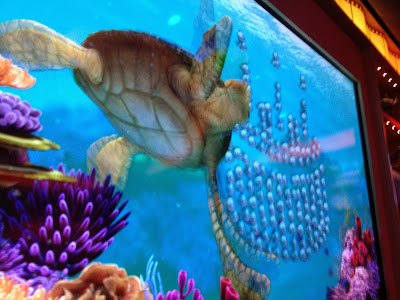 We celebrated Marc's birthday again tonight (for the cruise.)  There was a special little show and dessert in honor of those with birthdays. 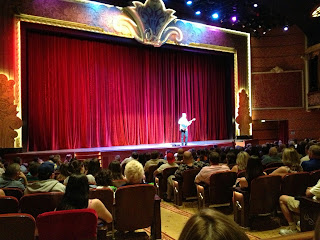 After dinner we saw a great show.  I’ll have to look up his name later because I don’t remember it.  He is a musical comedian and he kept the crowd thoroughly entertained with a mix of reworked Disney songs relating to our cruise and amusing renditions of current and older music.


The one problem with getting Zoe to take a nap was that she was not tired enough to go to bed.  She ended up staying up way too late.  I hope she at least sleeps well, now that she is finally asleep!


Zoe deciding that she will sleep in the top bunk: (but she didn't!) 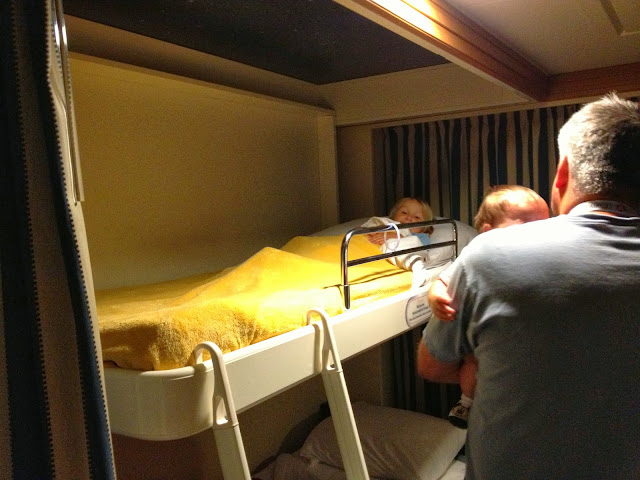