We had breakfast at Kyrie's favorite breakfast place, Kona Cafe.  Kyrie loves the Tonga Toast there, but is disappointed that she never gets to try the pineapple and macadamia nut pancakes.  The Tonga Toast is (I think) deep fried french toast with banana in the middle. ...AND coated with cinnamon and sugar and served with strawberry puree which eliminates the need for syrup.  Add the Lilikoi juice or 100% Kona pressed coffee and it's heaven.  Today I went with the coffee. 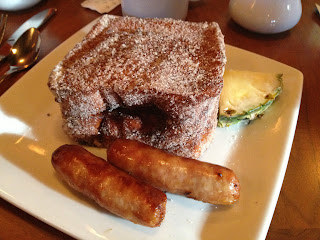 I stuck with The Samoan which is poached eggs covered in hollandaise sauce over pulled pork hash.  It's really good.  Although when it was served, Jacob said, "I can smell somebody's feet." 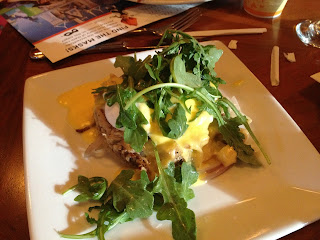 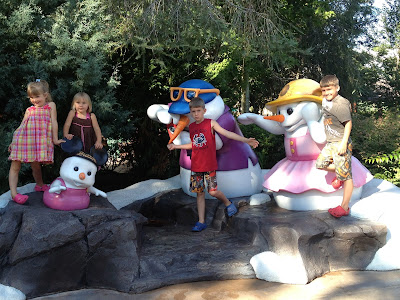 After breakfast we took the bus to Blizzard Beach waterpark.  This is the first time the kids have been there and they had a blast.  The boys just loved the place and thought they should go on every slide - even the really huge one.  Kyrie and I wouldn't let them go on that.  I think they did go on everything else, but I don't know because I spent most of the day with Zach and the girls.  Kyrie can fill in the details on what she and the boys did. 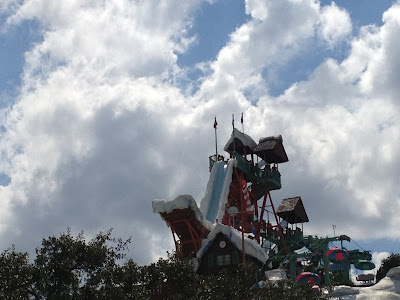 First we all rode the ski lift up to the top of the hill with all the BIG slides.  Jacob was determined to go on "the tallest slide in America."  I told him to start with the one next to it which was also quite intimidating.  Max decided he was also going to go on that one.  This was a bit surprising because just six months ago when we were at Disney World he wouldn't ride on Pirates of the Caribbean or Buzz Lightyear's Space Ranger Spin, both of which allow even infants to ride.  I was sure he would back out (maybe both of them) and told them it was okay if they got to the front of the line and changed their minds.  To just come down another slide and meet at the bottom by the ski lift again. I was totally too chicken to attempt the slide they were going on and walked to a toboggan like slide.  The scariest part of my ride was the black snake I saw slithering across my path.  I was scared the rest of the day.  I got down in plenty of time to see Jacob indeed come down that slide and he even said he enjoyed it!  I asked if Max was coming next and he assured me he was.  I look up to see a kid flailing all four extremities all the way down and I feel terrible that I let him try it.  Then he arrives at the bottom, stands up and gives me a big smile and two thumbs up!  They both want to go on the biggest slide now and Marc and I agree not to let them.  Mostly because as a chiropractor, I know that small accidents and injuries now can cause bigger problems down the road.  This slide is one of those things that could!
I actually let the boys go up the ski lift on their own and ride one more slide together instructing them to meet us back at "Tikes Peak."  I am impressed with how responsible they can be when given a special privilege like that. 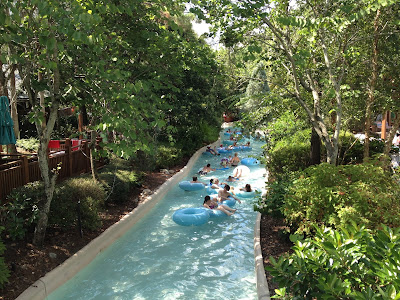 Next I check on Marc and the little ones.  It's Zach's sleepy time of day, so I take Ella away to do something in water deeper than 24 inches!  We did a couple little (but not sooo little slides) and went once around the lazy river.  The boys have since checked in and been allowed to play in the pre-teen area called something like "Skiers in Training."  They were leaping across icebergs.
All seven of us then go for a trip around the lazy river.  Zoe gets her own Zoe sized inner tube with a sort of floor in the center of it that she can sit on.  She doesn't want anyone to hold onto her.  It was pretty funny when we all got split up and I can see Marc back quite a ways when I suddenly see Zoe float up to me all alone with a big smile on her face!  I kept her at arms length the rest of the trip. Zach slept most of the ride except when he would get splashed too much. Overall he didn't mind it.
The boys got to go up the hill one last time while the rest of us ate lunch.
The kids' meals came in sand buckets so I watched the girls play in the sand then while Marc took the boys for their lunch.  It's nice that they're still young enough to want the buckets too.
To end the day, Jake and Max and I take a quick dip in the wave pool before climbing the stairs up the massive hill (while watching out for snakes) because it was faster than waiting for the ski lift again. We raced each other down the toboggan slides.  I won,for the record.  Nice day although since the kids interests are so varied now, it's difficult to spend time all together.

I love the back story of Blizzard Beach.  A freak snowstorm hits central Florida and some enterprising individuals decide to cash in and build a ski resort.  Soon after, the normal Florida weather returns and they are left with the waterpark that we see today.  The theming is perfect here, complete with a ski jump, melting snowmen, toboggan runs, and much more.  Here are some pictures from around the waterpark... 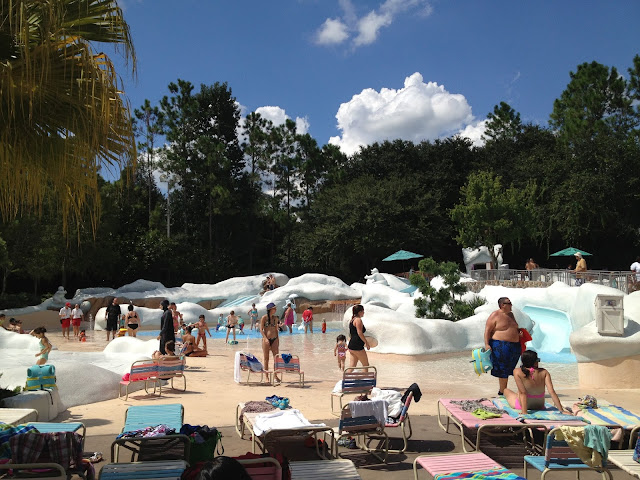 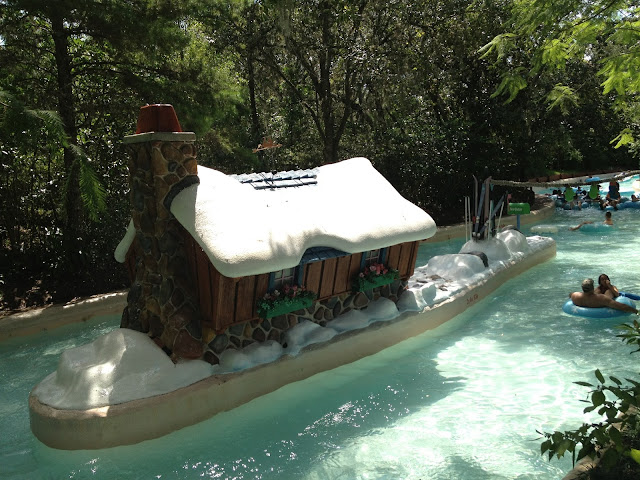 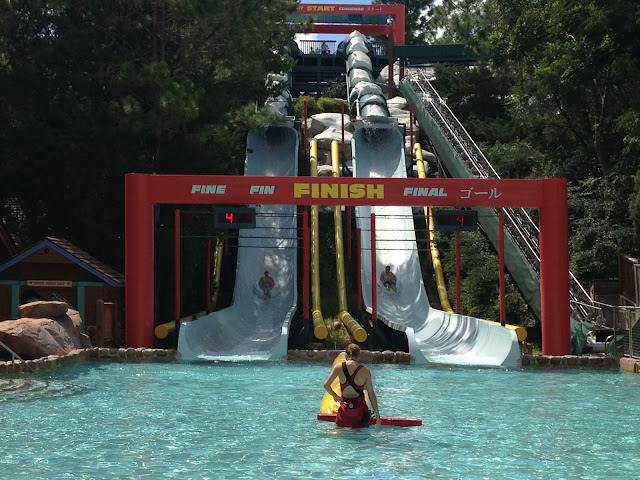 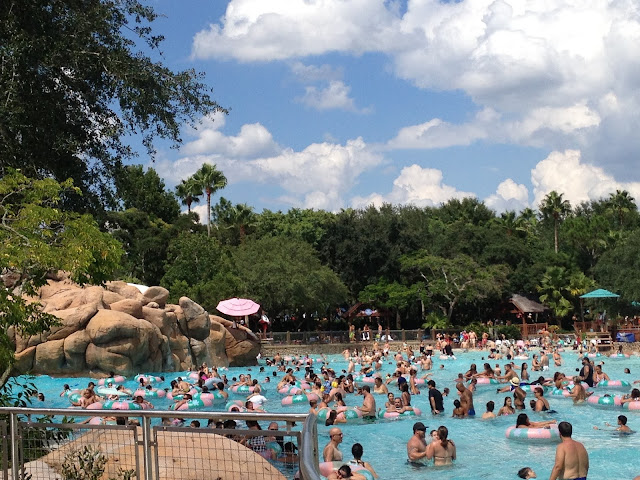 After a short break back in our room it was time for dinner at Chef Mickey's. 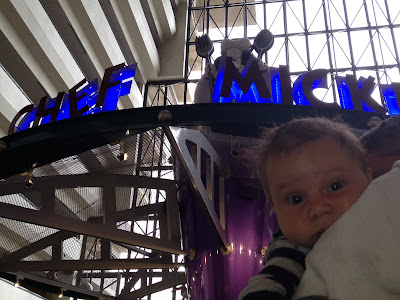 The kids always love this restaurant. (They even play Chef Mickey's at home and set up a lunch "buffet" for themselves and take turns pretending they are various characters.)   It has okay food and of course plenty of characters... 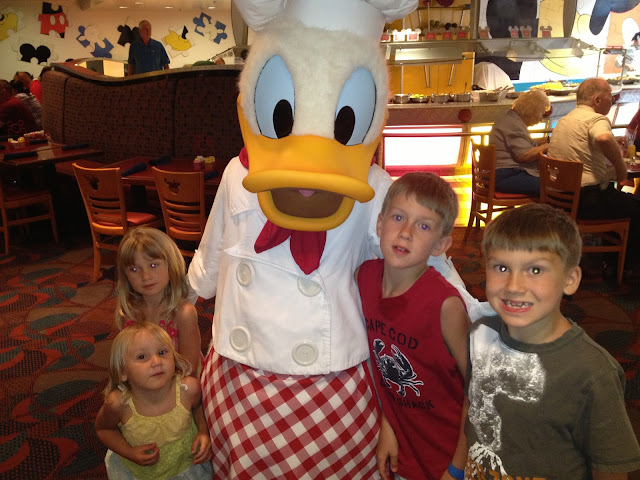 There are so few pictures of Zoe actually smiling that I just had to include this one: 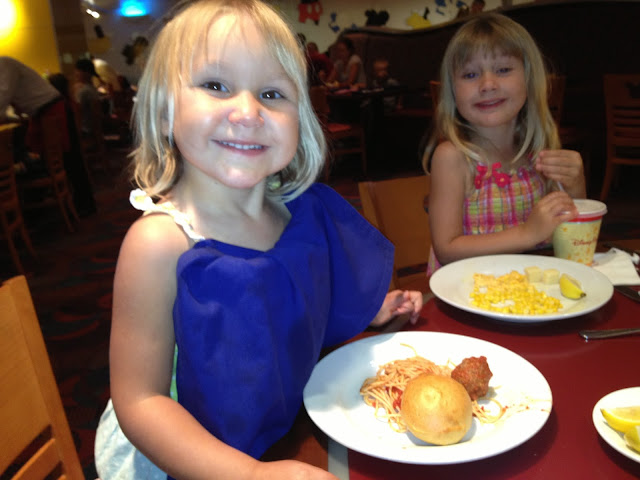 Zoe has been pretty cranky on this trip.  Too much sugar, the disruption to her sleep schedule, and over-stimulation have been tough on her. (And being two years old!)  She's also been waking up a bunch of times throughout the night which have made Mommy and Daddy pretty cranky too!

I thought this was a funny picture to end the day with... 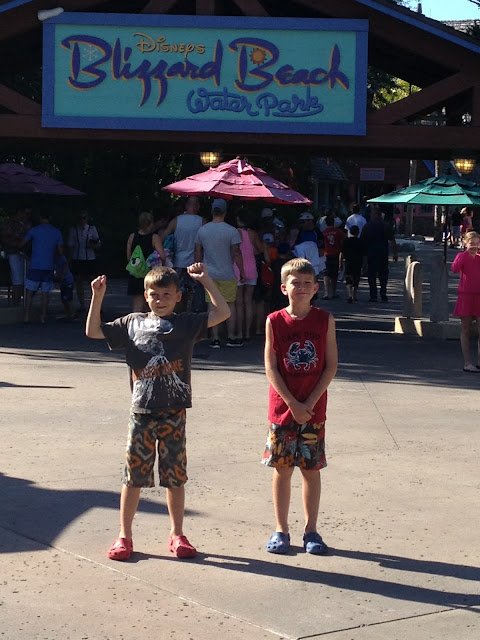 I think this one is funnier: 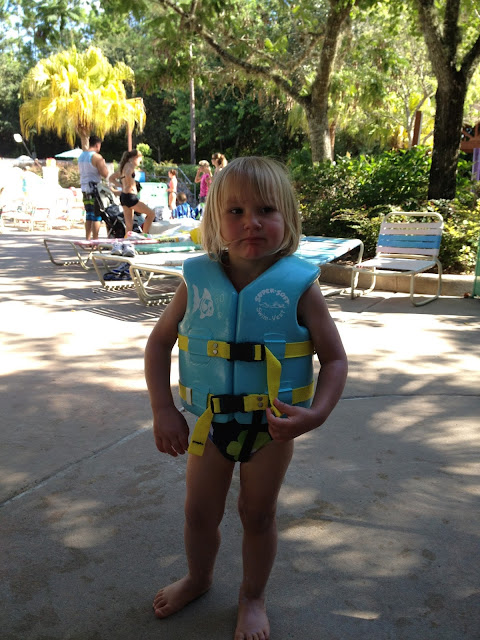 or maybe this one: 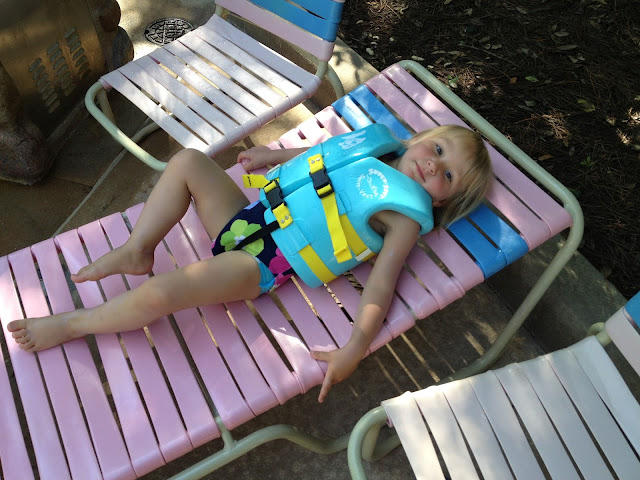