I never got a chance to write yesterday.  If I get a chance I’ll try to remember what we did and fill in the details.  For now, I’ll just write about today while it’s fresh in my mind. 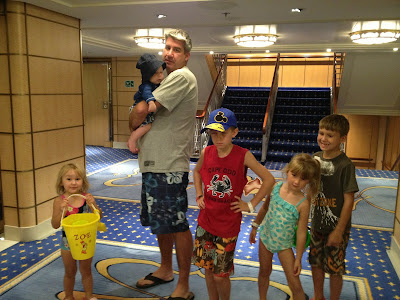 We arrived at Castaway Cay (Disney’s private island in the Bahamas) midmorning today.  After a quick breakfast in our room we headed down to get off the ship.  We realized that we didn’t have Max’s ID card with us after Kyrie, Jacob, Ella and Zoe were already off the ship.  They told us to go up to Guest Services where they would be able to give him a new one very quickly.  So Max and I did that, but there was a very long line at guest services so it took a while.  Then, when we got it and headed back down to the gangway, they told us that adults need a photo ID as well to get back onto the ship (they never did ask for these when we came back).  So, Max and I (and Zach) went back to the room to get Kyrie’s and my drivers licenses. 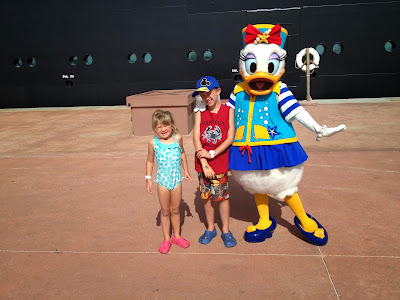 Meanwhile, Kyrie and the others have been standing outside the ship in the hot sun for quite some time now. (40 minutes or so!)  They couldn’t go to the beach because I would have no idea how to find them.  They also couldn’t really get back on the ship, because we might have not seen each other and wouldn’t know what was going on.  Needless to say, Kyrie was not very happy by the time we got out there. 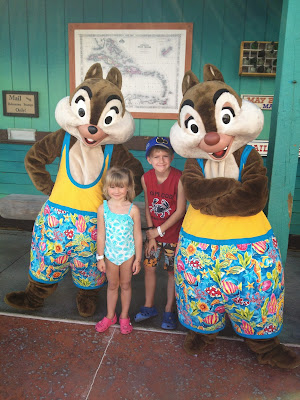 At least the kids were able to see a few characters while we waited, watching everyone else file off the ship and head to the best spots on the beach.

We found a very small spot of shade and I sat on the beach towels to wait until I realized tiny red ants had invaded and were biting me everywhere.  We were trading in the towels when the rest of them finally showed up. 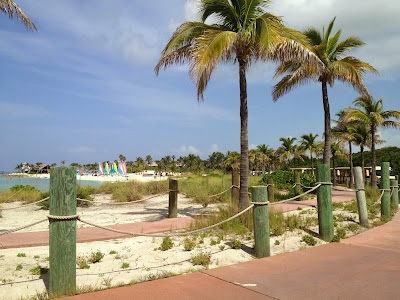 Kyrie never really was able to enjoy herself at the beach today.  It was very hot and by the time we finally got to the beach the only shady spots were in the back where you couldn’t even see the ocean.  (Just a sea of empty beach chairs in the shade with no one sitting in them.) We’ve been to Castaway Cay on our two other Disney cruises, but both of those were on the older ships that hold far fewer people.  We weren’t used to this many people being there at the same time.  We tried to make the most of it. 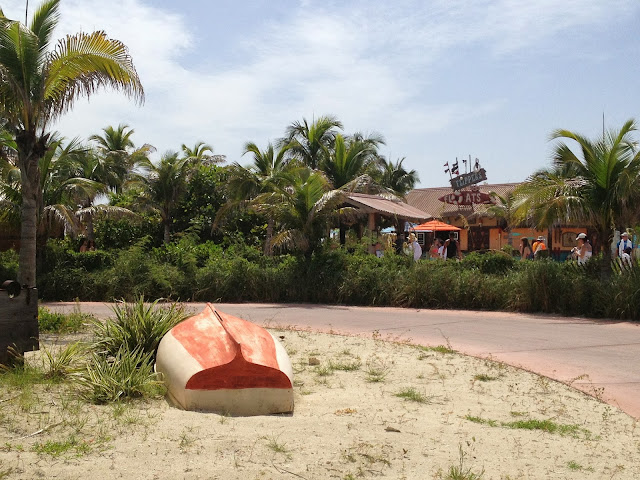 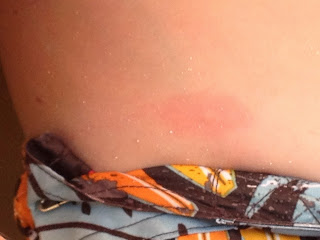 The boys and Ella enjoyed the Pelican Plunge waterslides.  Ella and Zoe had fun digging in the sand.  And Zach got his first dip in the ocean.

The Conch Coolers helped brighten the day. But there was also something biting in the water.  We all still have marks a week later.  Someone suggested it was jelly fish.  Not our most enjoyable Castaway Cay day! 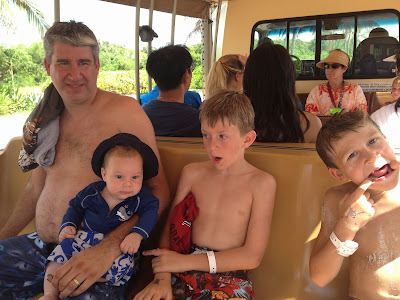 Lunch on the island was good and we didn’t have any trouble finding a table since we ate later in the day.  After that, we headed back to the ship for some pool time.  The kids enjoyed watching movies while dipping in the pool and taking one more spin on the Aquaduck. 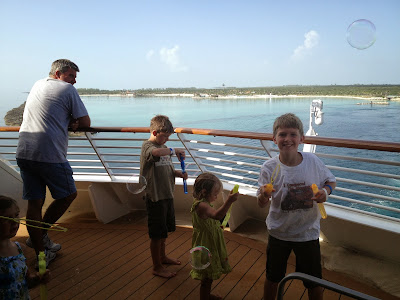 The kids had their own sail away party as we left Castaway Cay.  They were given these huge bubble wands that couldn't travel home easily, so this was a great time to use them! 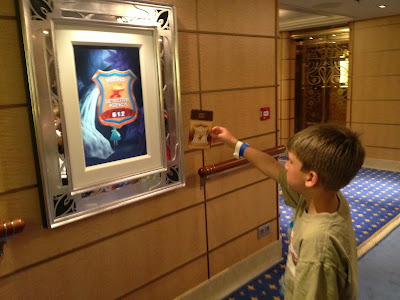 Before dinner, we solved our Midship Detective Agency case from the day before.
It was neat that the game used artwork that decorated the ship.  If you didn't know about the game, you never would have guessed that someone could wave their detective badge at it and it would become interactive.  I tell you, it is impossible to be bored on this ship! 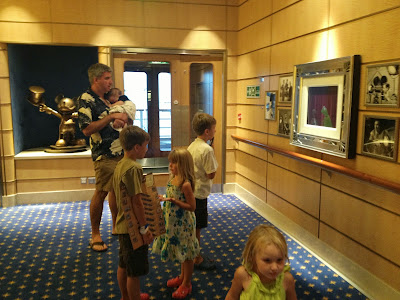 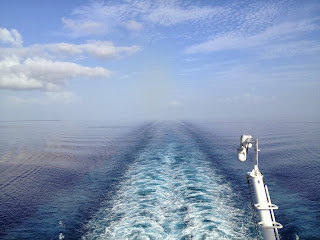 The sea was unusually still tonight.  I was used to seeing small white caps on the waves, now there were no waves except from the wake of the ship. 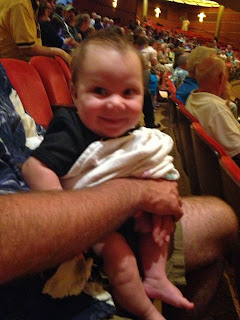 After dinner the older kids headed back to the kids club and Kyrie and I took Zoe and Zach to the show in the main theater.  They both really enjoyed it.  I thought that Magic Dave was the best part.  I don’t know that his magic is that great (Zoe never seems to let me actually watch the trick), but he is very funny with kids.

Following the show, Zoe took me through all of the stores and talked about all of the different things in there.  Then it was time to pick up the others from the kids’ club. 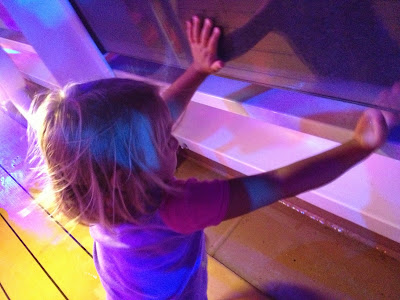 We ended the last night of our cruise by going up to the top deck to make wishes and sprinkle pixie dust into the ocean. 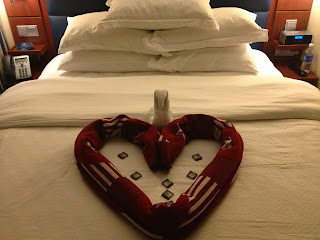 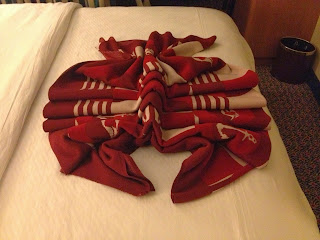 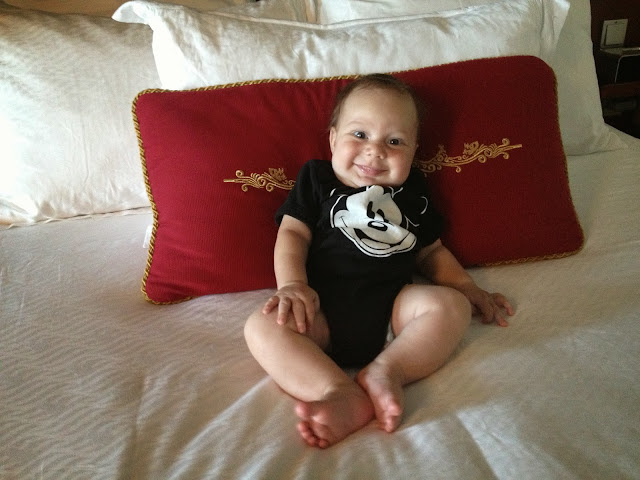 Some final thoughts about our trip:  Obviously from reading any of the prior days, it’s clear that this was not the easiest trip anyone has ever been on.  Juggling the two babies constantly has been kind of a pain.  But, we have still had a good time.  I definitely would have chosen a shorter vacation if I could go back and do it again, but I would still have done it.  The older kids had great time on the cruise and even Zoe enjoyed most of it.  Cruises are such unique vacations - there really is not any experience like it that I know of.  I look forward to our next one, but it definitely won’t be before Zoe is old enough to go in the kids’ club!

I don’t think I would have shortened the trip.  I think we took it much easier than we would have since we had so many Disney days.  It was nice that we had the time since I was on maternity leave.  It was hard with five kids (mostly because of an obstinate two year old) but so is life.  I’d rather be at Disney than not at Disney!  (And I’d rather have five kids than an easy time.) We had a great time and lots of magical memories!  Zoe on the other hand did not recognize our house when we pulled up, so perhaps it was a bit long for her! 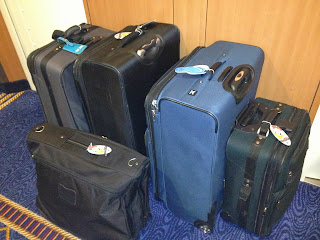