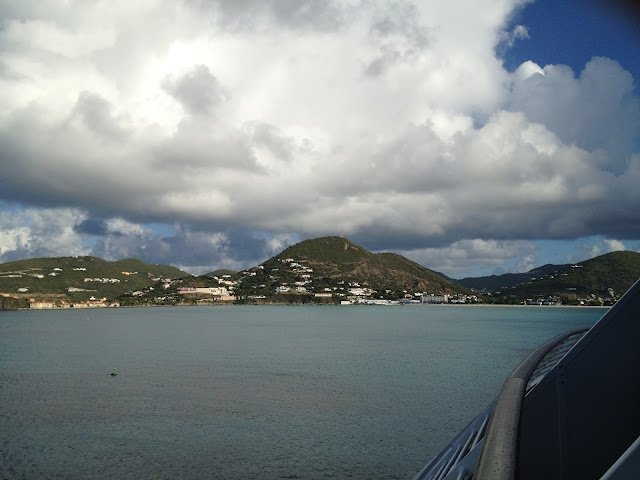 We all slept well last night for a change!  We arrived in St. Maarten this morning.  We stayed on the ship because it’s a lot of trouble for us to go anywhere and plus we haven’t had time to spend at the pools on the ship yet.   We would have liked to see the island again – it’s one of our favorites – but we’ll wait until the kids are older.  Yes, we really need some R & R! or at least something a little closer to it than dragging five kids around an island. 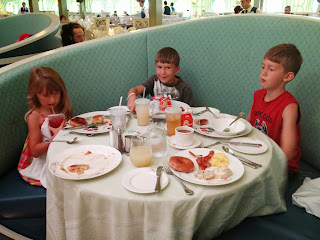 Kyrie, Jacob, Max and Ella went down to the breakfast at Enchanted Garden, while Zoe, Zach and I headed up to the buffet as usual.  I was excited to get to watch sea turtles in the bay while we ate our breakfast!

Apparently their breakfast turned out better than ours.  We ate at the Enchanted Garden which is a table service/ buffet in the morning.  I really preferred the offerings at the Royal Court more.  The biggest problem is that Ella and I don’t mix well when I have an agenda (to get to the pool ASAP.)  Even after what felt like forever, she left saying, “I’m hungry. I didn’t eat much.”  Which is probably true but staying there another hour still wouldn’t have helped. Anyway, there is plenty of food by the pool.

After breakfast the kids club was open for toddlers and their parents, so Zoe finally got to play there again.  She was so excited.  She mostly played with the bed in the Toy Story area.  She kept pretending she was going to bed and then getting up the next morning.  They had some organized activities for the toddlers, but she didn’t want anything to do with that.  She just wanted to play with all of the stuff that has been kept from her all week!
Last night, when we took Zoe to the nursery, she asked  to go to the “regular nursery.”  Then clarified…”the one with computers”…or in other words the kid’s club.  I don’t think the big kids would like her name for it! 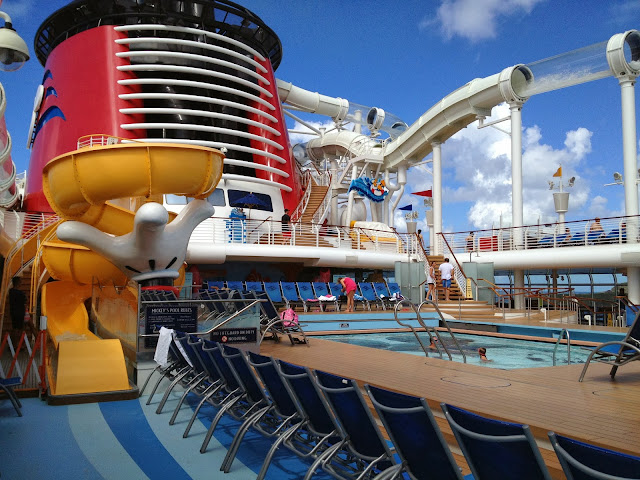 We met up with the others at the pool.  I took a turn on the Aquaduck with Ella.  It was more fun than it looked like it would be.  It was pretty fast most of the way and plenty of hills.  Besides that we just played at the pools for a while and then ate lunch on deck where we were still able to watch the sea turtles.

The kids having fun in the Mickey pool: 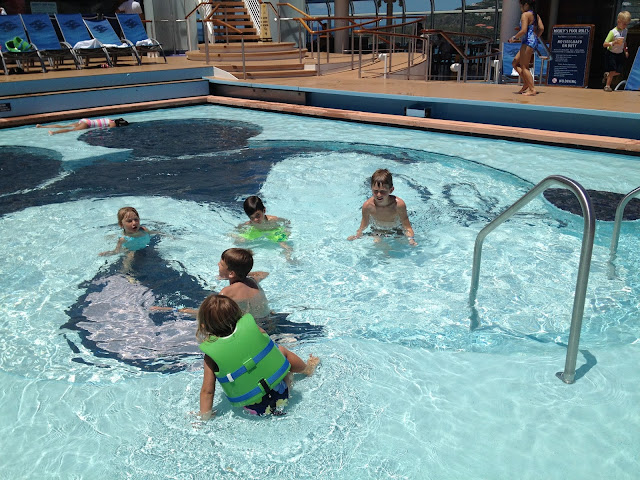 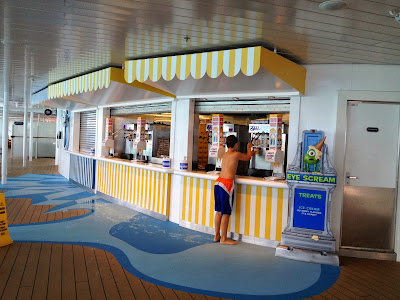 Somebody likes her ice cream! 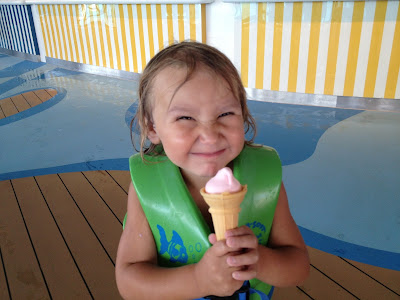 After lunch, Jacob, Max, and Ella had appointments at the Bibbity Boppity Boutique, (err, it’s called Pirate League today) to get pirate makeovers. Zoe doesn't meet the age requirement. We bought pirate costumes before the trip, so they just got the makeup and some accessories.  The results were awesome!  The kids loved looking like pirates. They also loved the experience!

First they chose pirate names by a random roll of the dice.  Then they chose the look they wanted and got started.

They got bandanas, earings, an eye patch, and sword then finished by taking a pirate oath. 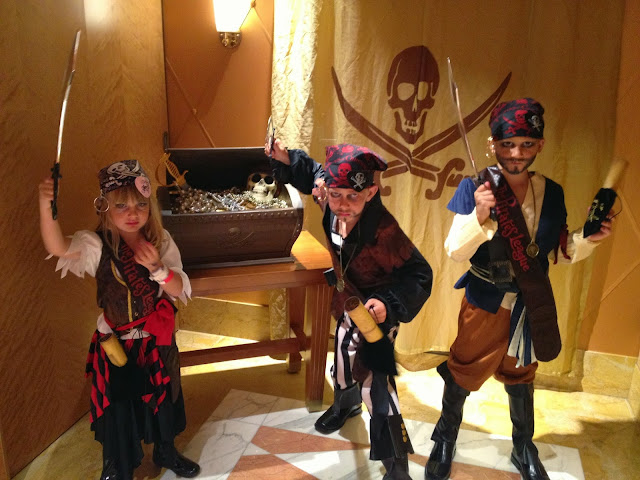 The kids spent some time at the kids club while Zach and Zoe took a nap.  Kyrie was able to spend some time at the Spa and I got some time to finish watching the movie that I started watching last night.  It was called Upside Down, a science fiction movie that’s too hard to describe here.

I got to spend 75 minutes at Senses (the onboard spa.)  They had a special sampler package today and it really helped me relax and refocus on how I wanted to spend the rest of this vacation.  (Which is less running around and more time to relax and appreciate my awesome family including consciously cuddling my sweet Zachary as my maternity leave soon ends.) 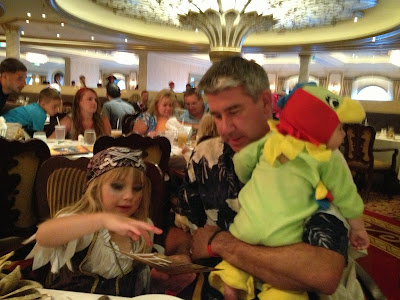 By dinner time we had put Zoe and Zach in their costumes as well.  Everyone got a kick out of Zach dressed up like a parrot.  Zoe didn’t want to go to the nursery tonight, so we all went to dinner.  It went well.  Zoe managed to stay in her seat almost the whole time and everyone ate well. 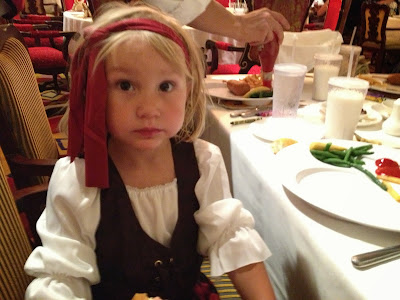 Everyone in their costumes: 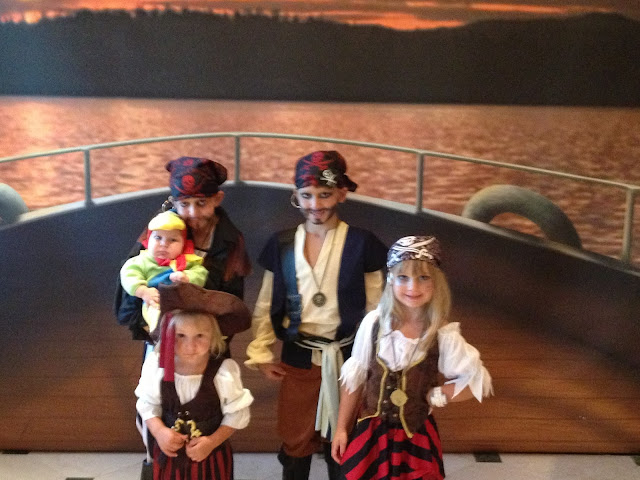 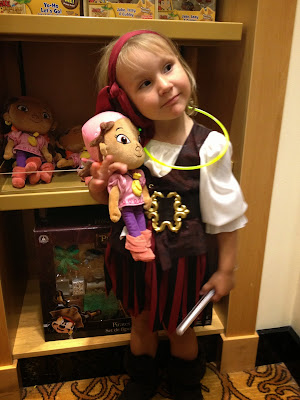 After dinner we headed on deck to the Character pirate show.  This is kind of a pre-show for the real pirate party that doesn’t start until 10:30pm.  After that we lookrd through shops then headed to the main theater to watch the movie “Planes”.  I managed to get Zach to sleep before the movie started so I thought that maybe it would go well, but I was wrong.  Zoe had no interest in the movie whatsoever and within 15 minutes I had to take her out of there.  Not long after that the rest of them had to leave also because of Ella.  What a disaster!
When we got back to the room though, Zoe wanted to put on her PJs and head to the nightly show.  I guess the girl is telling us to stick to a routine!


At the pirate show: 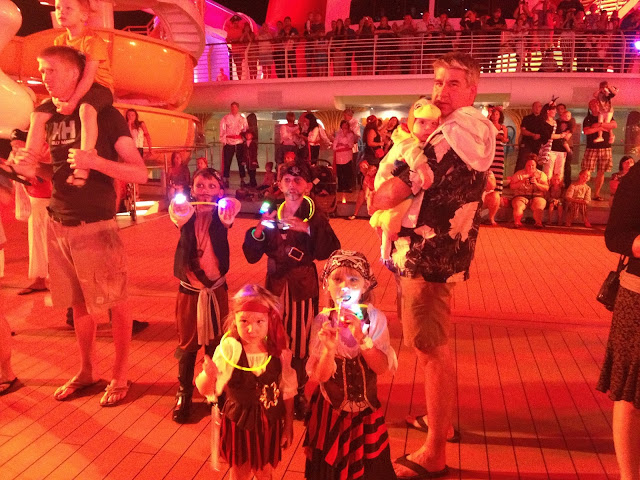 Taking a break from pillaging to take in a movie: 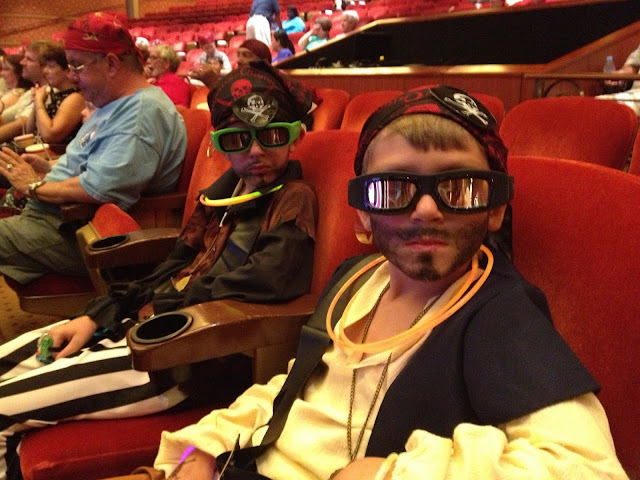 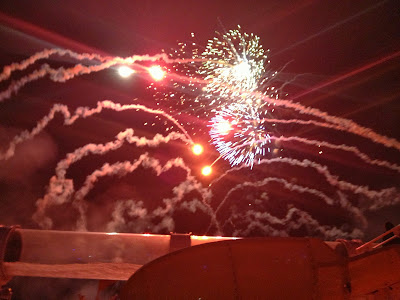 Since this is our third Disney Cruise, and I have not yet seen the fireworks, Marc let me take the boys to see them tonight.  The show starts with a ten minute pirate fight that culminates in fireworks.  The fireworks are nothing extraordinary, but the fact that they are at sea makes them special.  It was nice. It’s fun to hang out with Jacob and Max. 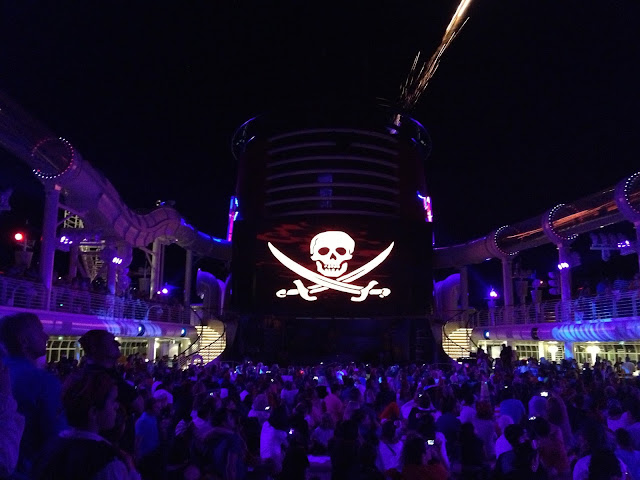 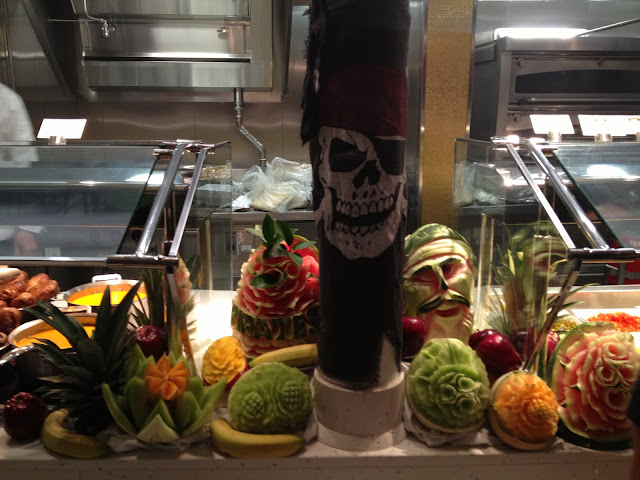 Unfortunately all the kids had to take showers or baths before bed to get the pirate makeup off.  Still enough remains that they will look like zombies in the morning.  No big deal, they will resemble their parents if we don’t go to sleep soon! 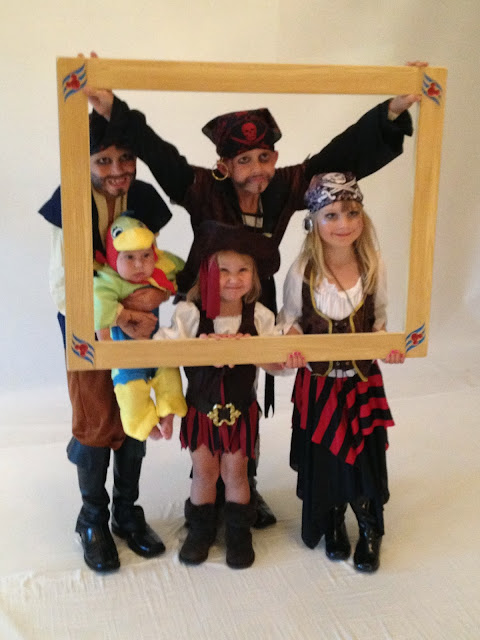